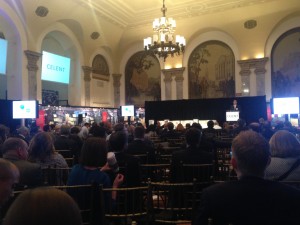 Celent CEO Craig Weber opened the day by describing what he believes is the driving force of innovations in financial services and insurance. He did so by creating an analogy to the Battle of the Alamo in 1836. What is now the state of Texas was disputed territory, with settlers moving in and taking control of land that Mexico claimed. Mexican troops responded with a siege and assault on the Alamo Mission, with a force that overwhelmed the small number of defenders in the mission. After a 13-day siege, virtually all of the defenders were killed.

However, the Battle of the Alamo inspired the settlers’ enough for a counter attack, which defeated the Mexican forces.  This also set the stage for the incorporation of the territory into the United States.

So what is the analogy to insurance and technology?

Weber said that the both in the Alamo and in innovation today, driving force is ‘inevitability.‘  The insufficient number of troops at the Alamo mission made it inevitable that they would be overwhelmed by the extant Mexican forces. The overwhelming force of the Mexican troops made it ‘inevitable’ that the settlers would respond with greater force, ultimately taking control.

But this is not a technology revolution

Both Weber and the Keynote speaker, Nadeem Shaikh, Founder and CEO of Anthemis Group, made the point that the inevitability of change in financial and insurance services is driven by forces more powerful than technology.

The fundamental shift is is the balance of information power between the suppliers and the consumers.  In his presentation, Shaikh noted that there are three elements:  social communication, technology, and data.

According to Shaikh, “Tech is table stakes.” Moreover, data must be relevant — but not always necessarily big.

While emphasizing the potential for new products and companies, unlike the early internet applications, investors are looking for real value in new company offerings.

The most important elements, according to Shaikh, are the economics (for the consumer as well as the provider) and the profitability. This has significant product implications. Bundled products may have to be deconstructed.  Value-added elements may be required.

Both Weber and Shaikh emphasized that directions at this point are not clear, and, as Shaikh said, “We need to get comfortable living in a fog.”

That said, both presenters emphasized that this is not a reason to delay.  As Weber said, “Without knowing the end, we must still take a position.”

And now for Canadian Pride …

(I have to add that these organization were recognized by the Insurance-Canada.ca Technology Awards earlier this year.)

Congratulations to our colleagues.

What did I learn today?

It is comforting to know that leaders such as Weber, Shaikh, and others are confident in an uncertain future — and that award-winning excellence by practitioners transcends national borders.

We live in exciting times.