Leave the car at home, Saskatchewan!

Judgment is one of the first things you lose when you consume alcohol and other impairing drugs, so SGI is encouraging people to leave their vehicles at home before they go out for beverages. That way, there’s no choice but to get a safe ride home after having a few drinks.

“People have good intentions, thinking ‘I’ll only have a drink or two then come home,’ ” said Earl Cameron, Executive Vice-President of the Auto Fund. “But alcohol impairs your judgment and can lead to poor decisions. You may be a very responsible person, who makes sound decisions when sober. You know it’s wrong to drink and drive, and are certain you would never do it. But throw alcohol into the mix, and that sound judgment isn’t so sound any more. That’s why planning ahead is so important. Leaving your vehicle at home and finding an alternate way to an event decreases the temptation to drive home under the influence.”

In 2015,(1) 53 people were killed and 578 more were injured in impaired driving crashes in Saskatchewan. That’s why SGI and law enforcement are once again targeting impaired driving this month. Police will also be watching to ensure drivers adjust their driving habits for winter road conditions, and for risky behaviour such as speeding, distracted driving and not wearing a seatbelt.

“There have been too many impaired driving tragedies in our province,” said Cameron. “These collisions are needless, unacceptable and 100% preventable. Think of the families of those whose lives have been lost, and don’t risk causing another family that same pain. Leave your car at home and eliminate the risk completely.”

Depending where you live and the time of day, you may need to get creative to ensure everyone gets home safely:

“Even after consuming a few drinks you can be legally impaired,” said Earl Cameron, Executive Vice-President of the Auto Fund. “Under Saskatchewan law, even at .04 Blood Alcohol Content you may think you are ‘OK’ to drive – but you are impaired, and you can lose your licence and your vehicle can be seized. The consequences are even tougher for new drivers.” 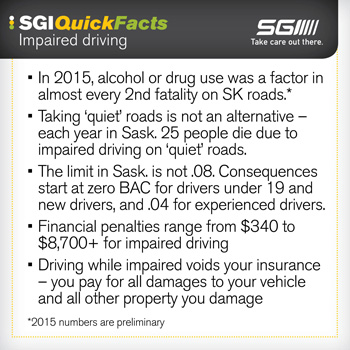 Saskatchewan Government Insurance (SGI) is the province’s self-sustaining auto insurance fund. SGI operates 21 claims centres and five salvage centres across Saskatchewan with a head office in Regina. SGI also works with a network of nearly 400 motor licence issuers across the province. Customers can now do some transactions online. For more information, visit www.sgicanada.ca.