Toronto, ON (Feb. 27, 2020) – The Federation of Canadian Municipalities (FCM) and Insurance Bureau of Canada (IBC) have released a new report, Investing in Canada’s Future: The Cost of Climate Adaptation at the Local Level, which offers striking new data demonstrating the urgent need for new investments in local climate adaptation and the areas where that investment is needed most. This report is the first of its kind to quantify the cost for municipalities.

As the risk of more frequent severe weather events increases due to climate change, many areas across the country are becoming riskier to insure. Municipalities are on the front lines of climate change and require significant investment to protect the public, property and businesses from the devastating effects of climate change.

According to the report’s findings, avoiding the worst impacts of climate change at the municipal level will cost an estimated $5.3 billion per year, or equivalent to 0.26% of Canada’s GDP. Studies have shown that investments in resilient infrastructure have a return on investment of $6 in future averted losses for every $1 spent proactively. Those investments are critical to helping local communities adapt to the changing climate and to reduce risks to Canadians from extreme weather.

Given the scale and size of the long-term cost of adapting to climate change, the report suggests that future research and analysis by all levels of government must consider innovative ways in which private sector capital can be utilized to support enhanced community resilience.

The report also found that Canada’s eastern and northern regions are generally most in need of adaptation investments — with flooding, erosion and melting permafrost posing the greatest risk. Among infrastructure priorities, local buildings, dikes and roads require the most urgent upgrades.

“When homes, businesses, farmland, and public infrastructure are hurt by extreme weather events, Canadians feel it in their communities first,” said Bill Karsten, FCM President. “Municipal leaders are prioritizing resiliency in their towns and cities, but there’s more we can and must do. FCM is proud to partner on the development of this crucial new data that underscores the importance of greater investment in municipal adaptation and prevention amidst the effects of a changing environment. All orders of government can work together to protect the public infrastructure that Canadians rely on in their neighbourhoods.”

“Across the country, Canadians are feeling the devastating impacts of climate change as the financial and emotional costs continue to rise,” said Don Forgeron, IBC President and CEO. “Governments need to collaborate in funding the resilient infrastructure needed to protect Canadians from flooding, wind and wildfires. Given the size of the estimated investment needed at the local level, government should consider how the private sector and how private finance can help make our communities more resilient.” 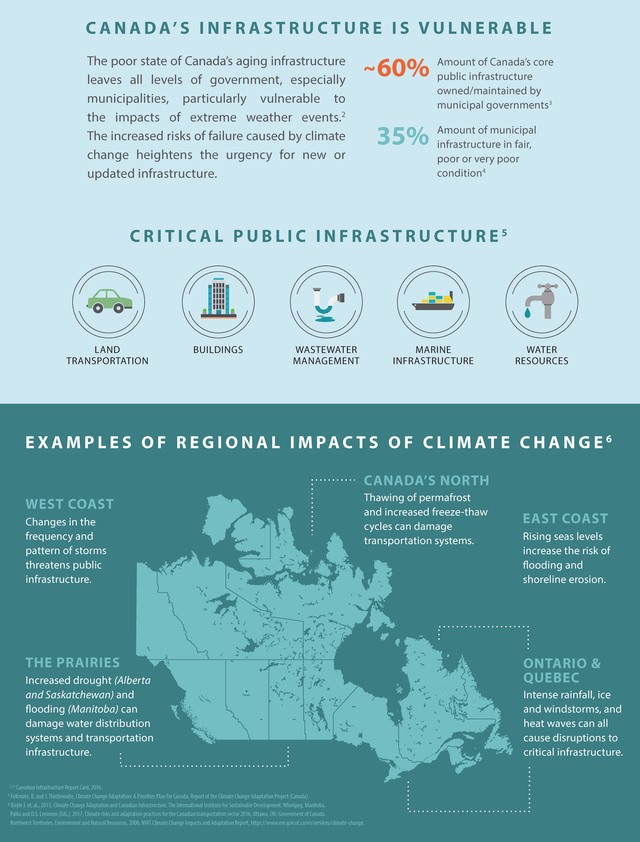 About Insurance Bureau of Canada

Insurance Bureau of Canada (IBC) is the national industry association representing Canada’s private home, auto and business insurers. Its member companies make up 90% of the property and casualty (P&C) insurance market in Canada. For more than 50 years, IBC has worked with governments across the country to help make affordable home, auto and business insurance available for all Canadians. IBC supports the vision of consumers and governments trusting, valuing and supporting the private P&C insurance industry. It champions key issues and helps educate consumers on how best to protect their homes, cars, businesses and properties.

P&C insurance touches the lives of nearly every Canadian and plays a critical role in keeping businesses safe and the Canadian economy strong. It employs more than 128,000 Canadians, pays $9.4 billion in taxes and has a total premium base of $59.6 billion.

About the Federation of Canadian Municipalities

FCM has been the national voice of municipal government since 1901. Our members include more than 2,000 municipalities of all sizes, from Canada’s cities and rural communities, to northern communities and 20 provincial and territorial municipal associations. Together, they represent more than 90 percent of all Canadians from coast to coast to coast. Municipal leaders from across Canada assemble each year to set FCM policy on key issues.

Today, we advocate for municipalities to be sure their citizens’ needs are reflected in federal policies and programs. Year after year, our work benefits every municipal government and taxpayer in Canada, and our programming delivers tools that help municipalities tackle local challenges.