More than half of Canadians admit their cellphone distracts them while driving: Desjardins survey

Aurora, ON (Sept. 25, 2019) – Despite stricter penalties and new technology to help curb the problem of distracted driving, many Canadian drivers still can’t ignore their cellphones and other distractions while behind the wheel.

Results from the latest Desjardins national survey reveal that 53% of Canadians admit to having driven distracted by their cellphones at least once – up from 38% last year. More are also aware of how dangerous distracted driving is with 32% (27% in 2018) of respondents saying it’s the riskiest driving behavior; that’s just behind alcohol-impaired driving at 35% (37% in 2018).

Still, Canadians seem to believe the problem lies with other drivers. Ninety-three percent of drivers think they rarely or never drive distracted by a cellphone, but at the same time, 84% claim they often or always see others driving distracted by cellphones.

“It’s clear that distracted driving remains a serious road safety risk,” said Denis Dubois, President and Chief Operating Officer of Desjardins General Insurance Group. “It’s important to continue to bring awareness to this serious issue as we need to make distracted driving as socially unacceptable as drinking and driving. Stricter penalties and technology help but distracted driving is preventable and changing our behaviors will save lives.”

Research from the Traffic Injury Research Foundation (TIRF) shows that 1 in 4 fatal crashes in Canada involves distraction. Even with increasing fines, demerit points and police ramping up efforts to combat the issue, there were still over 350 people killed in road crashes involving distraction in 2015 alone.

“It’s not just the drivers who are at risk, distracted driving has deadly impacts on passengers, pedestrians, cyclists and other road users”, says Robyn Robertson, President and Chief Executive Officer of TIRF. “We need a commitment from all Canadians to be attentive on the road and to speak up with friends, family and co-workers to reinforce safe driving habits.”

Taking a stand against distracted driving with Ajusto

Since the launch of the app in 2015, Ajusto signals when drivers are distracted by their phone. To this day, this feature was used to help drivers become more aware of the risks of this dangerous behavior, but it wasn’t used to calculate their score. However, Desjardins Insurance has now decided to address the issue directly by monitoring cellphone related distractions and using it as a factor in determining their score. This was launched first in Quebec with rollouts planned in Ontario in the near future.

When asked about the factors that distract them while driving:

When asked about cellphone use specifically, 42% say they use it to look at GPS apps, while 37% said they use their phone for calls and text messages while in their car.

What would stop someone from driving distracted?

Getting into a motor vehicle collision is still ranked first at 43%, followed by increased fines at 26%, and the possibility of auto insurance premiums increasing (if fined) at 21%.

Recently, many provinces have enacted laws that increased fines and penalties for those caught driving while distracted. Ninety-eight percent of Canadians know it’s against the law but the survey reveals that 37% do not know exactly what those laws entail and only 29% believe they are effective at combatting the problem. 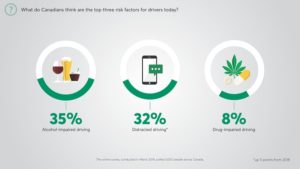 The online survey, conducted in March 2019, polled 3,050 people across Canada.

Desjardins Group is the leading cooperative financial group in Canada and the fifth largest in the world, with assets of $310.9 billion. It has been rated one of Canada’s Top 100 Employers by Mediacorp. To meet the diverse needs of its members and clients, Desjardins offers a full range of products and services to individuals and businesses through its extensive distribution network, online platforms and subsidiaries across Canada. Ranked among the World’s Strongest Banks according to The Banker magazine, Desjardins has one of the highest capital ratios and credit ratings in the industry.