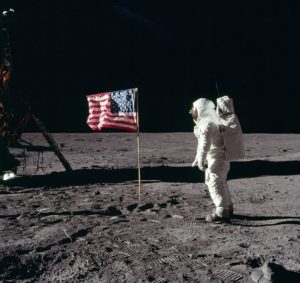 In 1962, US President John F. Kennedy made a speech which committed that the United States would land a person on the moon within 10 years. Immediately, two camps were formed.  The first group was excited, confident, and committed (ranging from skilled scientists to cheerleaders).

The second group was also committed: “There is no problem; it will never happen,” they posited.

Regardless,  the race was on …

On 20 July 1969 – three years early, based on JFK’s commitment – American astronaut and aeronautical engineer Neil Armstrong was the first person to take the lunar module to land on the moon, announce that historic “first step,” and gather dust, soil, and rocks for analysis back on earth.

The second person stepping from the lunar lander was Buzz Aldrin, who brought the US flag to be planted and left on the Moon’s landscape.  The two took some time to run and frolic, bouncing easily with light gravity.

This was the first human visit to another celestial body. The success brought more queries, and space riders went riding rockets to test this and monitor that. Among other things, the landings on the moon provided new opportunities to learn more about our own planet and the potential for new inhabitable planets in the future.

Most Americans, and large numbers from other countries, were riveted to the television, radio, or words of mouth. And the next few years continued the enthusiasm with other tests, excursions and landings.

Does insurance fit in at all?

Let’s face it, P&C insurance rarely gets normal people thrilled – unless there is a cut in the premiums.  That said, insurers are continuously improving  policy wordings and 24/7 call centres. But let’s face it, at its core, the reason is basically just to “fix a car” as efficiently as possible. Is there something more can we do?

Let’s take a look at insurance in relation to space travel. According to CNN, insurance businesses in the US collected $715 million (USD) in premiums for space travel in 2017. Premiums paid out in the previous year totalled US$636.

The author suggested that this was a “slim profit.” However, they also note that “it remains a consistently profitable business.”

Insurance business continue to write new business for new risks in governmental and private companies. These include failures, collisions, etc., based on somewhat standardized underwriting from extensive analysis.

Over time, there have been different approaches for underwriting. Experience from private and public risk managers have stored and morphed new approaches.  Even Jeff Bezos and Richard Branson have not had to go outside the underwriters’ capabilities.

According to a recent report from Morgan Stanley, “While the broader global space economy is expected to triple over the next two decades, growing to $1 trillion, the insurance sector grows around 14% — from about $700 million to $800 million.”

What does all this mean?

Don Lincoln is a senior scientist at the Fermi National Accelerator Laboratory and author of The Large Hadron Collider: The Extraordinary Story of the Higgs Boson and Other Stuff That Will Blow Your Mind.

Lincoln took to space activities with laser-like, line-of-sight dedication. Over the years, Don continued his commitment to his profession with consistent focus. Don writes:

“Some might say that we have lost our will to explore space, but that’s not strictly correct. It’s certainly true that the last humans to shed the bounds of Earthly gravity were nearly half a century ago, but humanity has sent probes to all corners of the solar system. Rather than humans, robots have boldly gone where no one has gone before, digging into the Martian soil, flying by Pluto, landing on comets, and even venturing slowly into interstellar space.”

I can’t speak for Lincoln, but I know that the commitment is more significant than the results, since it continues to morph to meet ever-changing needs.

I also know that insurance can be as important and (maybe) as fun as space travel. Heck, we’ve already been to the moon!