The 6.4% organic growth rate of independent agents and brokers across all business lines coupled with “a red-hot mergers-and-acquisitions (M&A) market yield a healthy outlook for the future of the industry,” says Mark Crites, Vice President, Reagan Consulting. “2019 could be a historic year.”

Buoyed by the good news, as revealed by Reagan Consulting’s Organic Growth and Profitability (OGP) Q2 2019 survey, agents and brokers have “lifted their full-year 2019 growth expectations to 7.0%, up from 6.0% after Q1 results were posted,” reports Crites. 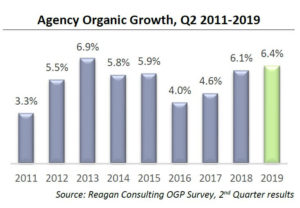 Late 2018 optimism was tempered after Q1 2019 by the sluggish employee benefits sector. At only 3.8%, employee benefits posted its lowest first-quarter results since 2013. The sector has rebounded, however, allaying concern. It posted a 5.5% growth rate in Q2 2019 that trails only slightly below its nine-year historical average. That bounce back “bodes well for the rest of the year,” observes Crites.

At 4.1%, Q2 organic growth rate for personal lines was the second highest since the start of the OGP study in 2008. Although the sector “historically has been a low-growth/high-margin line of business for most brokers,” says Crites, it had a banner year in 2018 and “shows no signs of slowing down.” He observes that insurtech competitors are not affecting the ability of agents and brokers to compete in personal lines but adds that rate increases are driving growth.

Nearly four in 10 firms (37%) that experienced growth in commercial lines for Q2 reported double-digit organic growth. The entire sector posted its third consecutive Q2 increase with a growth rate of 6.4%. This represents a small drop from Q1 growth, which was at a historic high of 6.9%.

The strong economy is helping commercial lines growth, but, as with personal lines, Crites points to rate increases as the primary driver. While numbers are not yet in, it’s expected that Q2 premium pricing will have increased again, making it the eighth consecutive quarter of rate increases across almost all property-casualty lines. But particularly for commercial lines, the “hardening rate environment and a growing economy is a recipe for success,” says Crites.

One Cloud on Q2 Horizon

Sales Velocity is a Reagan Consulting metric used as a leading indicator of future organic growth via new business production. Expressed as a percentage, Sales Velocity is calculated by dividing current-year new business by prior-year commissions and fee revenue. If a firm consistently posts sales velocity figures in the top 25% of the industry (15.4% or higher in Q2 2019), it’s likely the firm will show above-average growth.

In a “surprising decline amidst heightened growth levels,” says Crites, Q2 sales velocity was “down slightly, year-over-year, to 12.1%.”

2017 and 2018 were record years for mergers and acquisitions, and, with 328 deals announced during the first half of 2019, activity is up by 6.5% over last year. “Even at record-high valuations, buyers can still complete accretive deals,” explains Crites, adding that the “frenzy” continues. “We see no slowdown in M&A activity for the foreseeable future.” 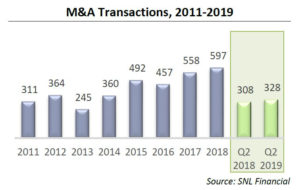 Reagan Consulting has conducted its quarterly survey of agency growth and profitability since 2008, using confidential submissions from nearly 200 mid-size and large agencies and brokerage firms. Approximately half of the industry’s 100 largest firms participated in this quarter’s survey. The OGP survey is the industry’s preeminent survey of mid-size and large privately held brokers.