A small group of winners captures much of the economic profit in the insurance industry. New McKinsey research quantifies just how far ahead the leaders are—and what other insurers can do to catch up.

Chicago, IL (June 25, 2019) – Every year, at insurance companies around the world, strategic planning processes unfold. They aspire to set bold new direction but frequently yield incrementalism and strategic inertia—in insurance, and in just about every other industry. In fact, research by our colleagues shows that economy-wide, in multidivision companies, the amount of capital allocated to each business unit from one year to the next is nearly identical; the mean correlation is .92.

There are myriad reasons for this, ranging from risk aversion to corporate politics to the Quixotic quest for the perfect strategy that does not exist. And there’s also an empirically substantiated way out: recognize that strategy is about playing the odds. Not every decision is going to result in a win—but companies that increase their batting average, so to speak, are more likely to succeed. Strategy is probabilistic, not deterministic. That, too, is the case in every industry, according to a multiyear research effort by our colleagues that culminated in the 2018 publication of Strategy Beyond the Hockey Stick.

We recently extended and deepened this research by taking a deep dive into the insurance industry. Our work confirms that insurers can take concrete, evidence-backed actions to move them in the right direction and, cumulatively, improve their odds of long-term success. Purposeful, bold moves aimed at shifting resources, boosting underwriting margins and productivity, and delivering on a series of programmatic M&A deals can dramatically improve an insurer’s odds of reaching the top quintile of economic profit over a ten-year period. While these moves may sound instinctive, many companies fail to pursue them rigorously. In fact, these moves are most powerful when undertaken in combination, at or beyond the thresholds of materiality described in this article and illustrated with examples from leading insurers in Asia, Europe, and North America. The point isn’t that there’s a magic formula for achieving strategic differentiation. Rather, by taking a hard look at the potential of your key initiatives to achieve bold results in these areas, you can get a realistic forecast of the odds that your strategy will transform performance.

Understanding the power curve and how to apply it

These findings may come as a wake-up call to insurers that find themselves outside the top quintile—but embarking on an effort to move up the power curve is difficult. The odds of companies in the bottom quintile from 2003 to 2007 moving to the top quintile over ten years were 17 percent, and the odds of companies in the middle moving to the top were 10 percent. Yet it is still possible for insurers to move up the power curve and, in doing so, substantially increase the amount of value creation. 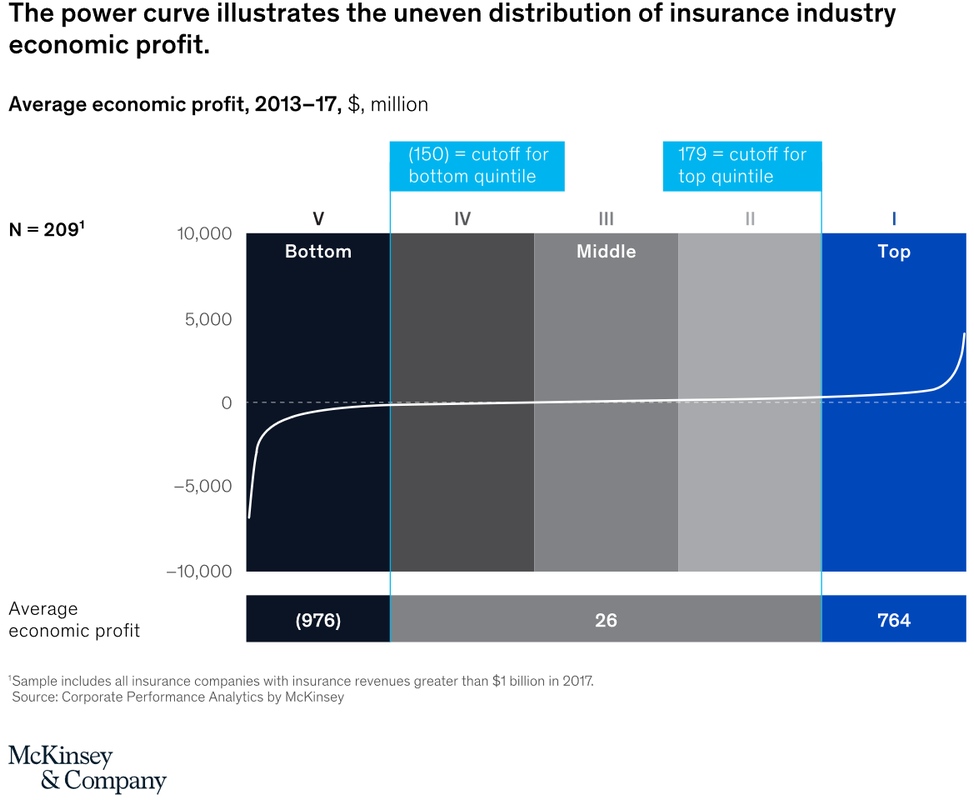 How to move up the power curve

Our research shows that moving up the power curve requires a laser focus on the factors that have an outsized impact on success, measured as economic profit. These factors are grouped into two categories: foundational factors and bold moves.

Foundational factors set the starting point for the carrier and for the external environment it interacts with, but they are not always within the carrier’s control in the near term.

After examining more than 40 potential levers, our research found that a company’s positive trajectory can be most explained by five bold moves:

These efforts are underpinned by endowment and trends and are controllable elements of strategies that increase an insurer’s odds of moving up the power curve. While the scale of these efforts required to affect a carrier’s position on the curve can be described as bold, they are not reckless. Instead, these moves must be strategic and made with conviction.

To learn more, including how insurers should pursue the five bold moves, read the full report on McKinsey’s website.

McKinsey & Company is a global management consulting firm that serves leading businesses, governments, non governmental organizations, and not-for-profits. We help our clients make lasting improvements to their performance and realize their most important goals. Over nearly a century, we’ve built a firm uniquely equipped to this task. For more information, visit www.mckinsey.com.