Toronto, ON (May 7, 2019) – Highlighting divergent opinions between global tech leaders and millennials, KPMG’s report on technology industry innovation shows some differences about which technologies each group feels will have the biggest impact on business transformation in their companies over the next three years.

Millennials in the technology industry, in just a few examples of differences, see 5G, quantum computing, and digital payments among technologies having the greatest impact, while industry executives see blockchain, virtual reality and On Demand platforms among the top technologies for business transformation, according to a new report from the tax, audit and advisory firm.

Yet, in a few examples of similarities, both millennials and tech industry leaders rank artificial intelligence, Internet of Things (IoT) and robotic process automation (RPA) high on their lists of transformational technologies.

“Millennials’ perspectives show the influence of having grown up in a digital and mobile world,” said Tim Zanni, KPMG Global and U.S. Technology Sector Leader. “While they are high on 5G’s impact in their companies within the coming years, a KPMG analysis projects that in about three years we will begin see 5G unlock an estimated $373 billion in technology company value globally. The timing aligns with tech leaders leaving 5G out of their top 10 technologies for business transformation in their companies over the next three years.”

The findings highlight new insights from the annual KPMG Technology Industry Innovation Survey of over 740 technology industry leaders globally, and a separate survey of 600 millennials working in tech.

KPMG’s survey of tech executives also found that RPA and blockchain have risen rapidly as two of the top technologies to help organizations improve their performance.

“Having RPA as the biggest mover in KPMG’s survey may mean companies would like to ease their way into artificial intelligence (AI).” said Zanni. “They see RPA as a step on the proof-of-concept path toward AI, which was number three on the list.”

Blockchain’s rise into the top four aligns with recently released KPMG findings showing that 41% of tech industry leaders surveyed expect to implement blockchain over the next three years, with nearly half saying it will change the way their company does business.

“The pace of change means it is more important than ever to make strategic, long-term investments in innovation, and pay close attention to the impact RPA, blockchain and AI are having on the business model and labor dynamics,” said Fiona Grandi, KPMG National Managing Partner, Innovation & Enterprise Solutions.

Regardless of the technology, tech leaders most frequently cited “improved business efficiencies” and “increased profitability” as the top benefits for companies adopting these transformational technologies. Surprisingly, “increased market share” and “new revenue streams” were farther down the list. “Unproven business case” was the most often cited challenge. “Business leaders are more focused on taking costs out of their business and are uncertain how new technologies can help them grow revenue and market share,” said KPMG’s Zanni.

KPMG’s report outlines the following actions that companies and their boards can take to gain a competitive advantage using the technologies: 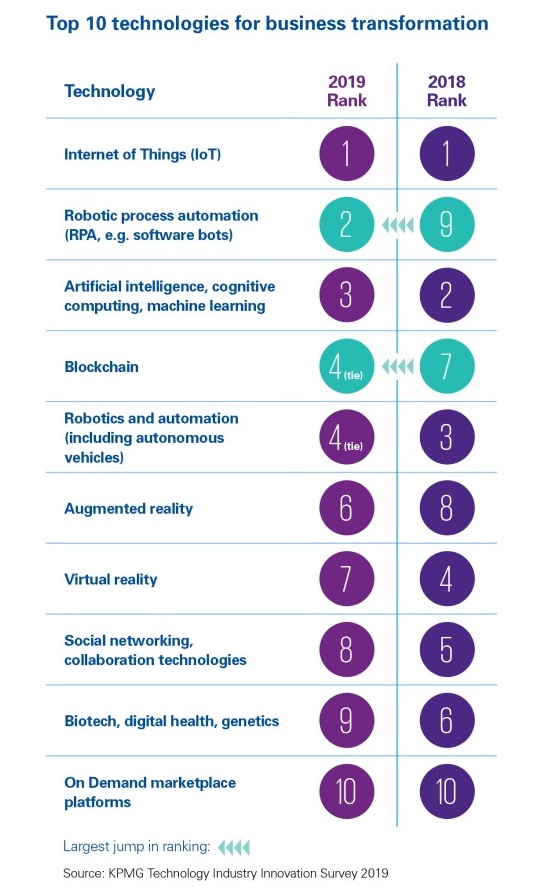 The 2019 KPMG Technology Industry Innovation Survey included responses from over 740 global leaders in the technology industry in 12 countries. Seventy-six percent of the respondents were C-level executives. The online survey was conducted from December 2018 to January 2019.

The 2019 KPMG Technology Industry Millennials Survey consisted of responses from 600 millennials working in the technology industry in seven countries. The online survey was conducted from February 2019 to March 2019.

KPMG is a global network of professional services firms providing Audit, Tax and Advisory services. We operate in 153 countries and territories and have 207,000 people working in member firms around the world. The independent member firms of the KPMG network are affiliated with KPMG International Cooperative (“KPMG International”), a Swiss entity. Each KPMG firm is a legally distinct and separate entity and describes itself as such. For more information, visit kpmg.ca.