Congratulations to the winners and finalists for 2012! The winners, as selected by the ICTA jury, were announced at the Insurance-Canada.ca Technology Conference in Toronto on March 5, 2012. Plaques were presented to the winners and to the finalists, including all members of groups which were part of these nominations.

The winners and then the finalists are listed below. We also extend our thanks to all of the nominees – and nominators – in the insurer, distributor, and supplier categories. 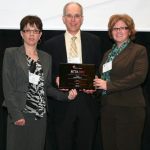 The winner in the Insurer category was SGI Canada for the pioneering work implementing standards for downloading of broker copy of policy declaration pages and broker memos as part of their daily EDI download transactions.

Andrew Cartmell, President and CEO, SGI Canada (centre) shares the award with members of the team.

The winner in the Distributor category was AP Reid for ZipSure.ca, a customer-facing fully automated insurance service targeted at tenants of larger landlords. 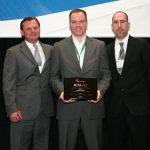 The winner in the Supplier category was RMS for iClarify, a validation and valuation tool that provides brokers and insurers with residential property intelligence. 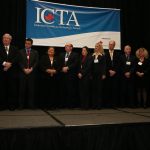 The nine ICTA finalists, and group members, assemble on stage at the ICTA luncheon as the announcement of the winners and presentation of awards is about to begin. 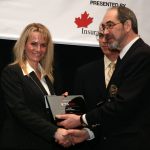 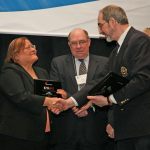 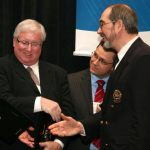 Finalists in the Distributor category included Donovan Insurance Brokers for their overall use of technology, encompassing customer-facing and market-facing applications, and automated support for staff, allowing a focus on quality customer service. 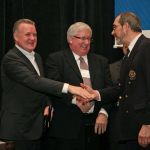 Finalists in the Distributor category also included Ingle International for the technology they use to develop and operate micro-sites used by school administrators and student customers. 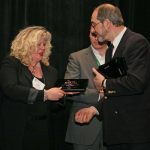 Finalists in the Supplier category included Allianz Global Assistance for its implementation of an online claims portal resulting in a high level of adoptions. 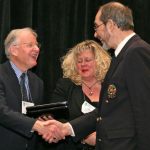 Finalists in the Supplier category also included Zycomp + MASTERCOM for the technology development and integration allowing downloading of broker copy of policy declaration pages and broker memos as part of their daily EDI download transactions. These are automatically filed at the broker without intervention.

Group project nominations required that at least two members of the group be insurers and/or distributors and that the project facilitate the processing of common data or transactions. 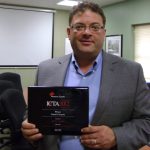 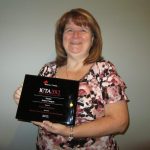 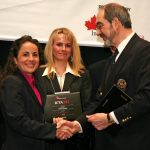 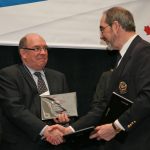 General information about the Insurance-Canada.ca Tech Awards is available on the ICTA homepage.