The country most affected by the outbreak has been China, which has reported 82,007 cases and 3,338 deaths; however, China has also reported that the number of new cases there has continued to decline due to early and aggressive containment measures. Outside China, a total of 102,968 cases of COVID-19 have been reported, with 4,191 deaths. South Korea has reported 8,320 cases and 81 deaths; new cases there have also been reported to be declining. The largest outbreak is currently in Italy with 27,980 cases and 2,158 deaths, followed by Iran with 16,169 cases and 988 deaths, and Spain with 11,178 cases and 491 deaths. Case numbers are growing in the United States as testing is expanding, with 3,536 confirmed cases and 58 deaths from the disease.

“Based on the estimations and projections from the AIR Pandemic Model, we estimate that this may represent a moderately conservative projection of cases; the vast majority will be asymptomatic or have mild symptoms,” said Dr. Narges Dorratoltaj, senior scientist at AIR Worldwide. “AIR projections also suggest that the number of mild to moderately symptomatic cases globally from March 18 to April 1 could range between 600,000 and 2,000,000, and the number of severe cases could range between 200,000 and 900,000, with deaths ranging from 10,000 to 30,500.”

AIR’s model-based estimates account for uncertainty and underreporting. Mild to moderate symptoms are the types of cases least likely to be captured in the official numbers, but even for severe cases and deaths, it is likely that there will be significant underreporting.

Dr. Dorratoltaj noted, “The difference between the low and high ends of the range is driven by a few factors. Uncertainty in the reported number of confirmed cases and the transmissibility of the virus play a significant role. Specifically, the lower end of the range represents a scenario where a) the true number of cases is relatively closer to what has been reported than estimated, and b) the possibility that containment measures (such as social distancing and quarantine) become more successful in reducing the transmission. If such containment measures—driven by international and/or local authorities—are successful, this could restrict the human-to-human transmission sufficiently to bring the eventual number of cases to or even below the low end of the modeled projected range of cases.”

On Wednesday, March 11, the World Health Organization (WHO) announced they had assessed that COVID-19 could be characterized as a pandemic. According to the WHO report issued as of 11 a.m. ET on March 17, 2020, there were 184,975 confirmed cases of COVID-19, the disease caused by the newly emergent SARS-CoV-2 virus, and 7,529 deaths worldwide; actual counts are likely to be higher due to underreporting. Efforts at containment have been showing success in slowing the spread of the virus in China as well as in a handful of other countries such as South Korea. At this point, transmission of the disease continues in Iran, and has been increasing substantially in several European countries and the United States, with increases expected in more countries.

This is the first pandemic caused by a coronavirus, according to the WHO. The virus responds well to comprehensive containment measures, as reported in China and South Korea. Governments around the world have now moved to reduce their citizens’ movements and tighten borders. In addition, flights have been canceled; bars and restaurants have been closed; conferences, festivals, concerts, and sporting events have been canceled or postponed; and further closures of schools and universities have been announced.

On Friday, March 13, the WHO stated that Europe had become the epicenter of the pandemic, with the majority of new cases coming from this region, outpacing China. Italy has been hit particularly hard, with 22% of their population age 65 or older and more vulnerable to the virus. The Italian government placed the entire country under quarantine on March 9. France and Spain also implemented lockdowns after the three EU states recorded their highest death tolls for a single day on Sunday, March 15.

The United States declared a national emergency on Friday, March 13. Travel restrictions to and from Europe were imposed, and travelers flying back from Europe faced long waits at major airports as the expanded coronavirus screenings were implemented. On Sunday, March 15, the U.S Centers for Disease Control (CDC) recommended organizers cancel or postpone events with 50 people or more for 8 weeks, while some states have banned large gatherings altogether. The United States has had limited testing capacity in the early stages of disease spread, and the number of available test kits remains limited, obscuring case numbers. Cases were confirmed in 49 states, plus Washington, D.C. and three U.S. territories, as of Monday at 10 a.m., with New York, Washington, California, and Massachusetts reporting the highest case numbers.

On the treatment front, several countries have reported a shortage of ventilators for those in danger of lung failure—a major cause of death from this disease—and they are attempting to acquire more. Some antivirals originally developed against other viral infections such as Ebola or HIV, are being repurposed and tested in COVID-19 clinical trials. Researchers and scientists across the world are working to develop effective treatment and a vaccine for COVID-19. During the week of March 16, a clinical trial to test a coronavirus vaccine starts with testing the vaccine on 45 healthy volunteers; however, a successful vaccine will not be available for a year or more. 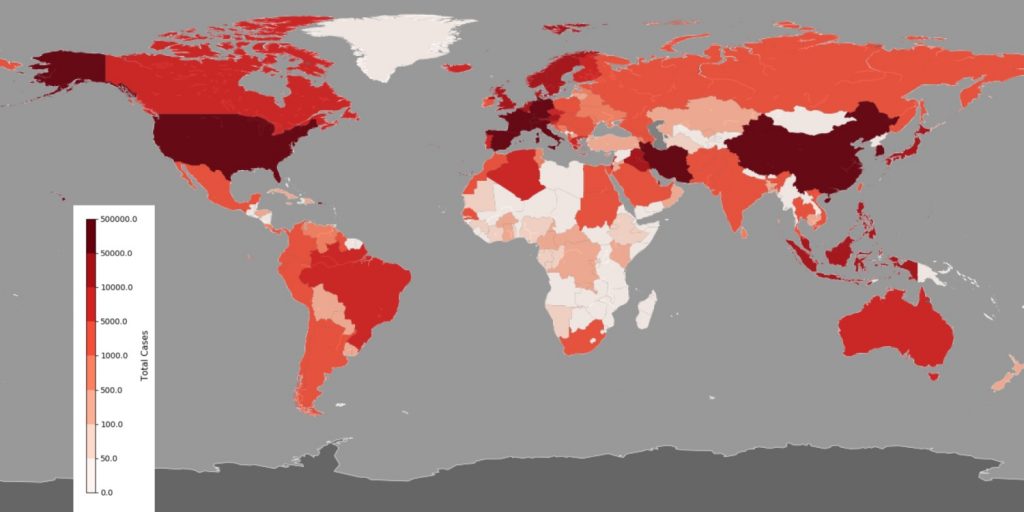 The AIR Pandemic Model total cases for March 25, 2020, including individuals who are mildly symptomatic or asymptomatic. This number is higher than the reported cases due to the fact that individuals with mild symptoms may not seek medical care and therefore go unreported. (Source: AIR)

Current observations suggest that a high proportion of infected individuals with the novel coronavirus, COVID-19, develop very mild and nonspecific symptoms. Therefore, they may not seek medical care and may not be counted in the published figures. Moderately symptomatic individuals usually experience fever, fatigue, and dry cough, and may ask for medical care. According to the China Center for Disease Control (CCDC), 81% of studied patients experienced mild to moderate symptoms and 14% of patients experienced severe symptoms; these severe symptoms include pneumonia, shortness of breath and, in more complicated cases, about 5% of patients according to CCDC, experienced acute respiratory distress syndrome, arrhythmia, and shock. A smaller percentage of patients also develop gastrointestinal (GI) symptoms, such as nausea and diarrhea. Intensive care unit (ICU) admission has been higher among people over 60 years of age with pre-existing comorbidities.

Dr. Dorratoltaj concluded, “There is high uncertainty around the fatality of the disease; however, it is estimated that COVID-19 has a higher case fatality rate (CFR) compared to seasonal flu (~0.1%) and a lower CFR compared to the 2003 SARS outbreak (~5.0%-10.0%). The current estimation for the average CFR ranges between 0.5% and 4%. According to the CCDC, among more than 72,000 patient records, with 86% of cases between 30 and 79 years old, current estimation for CFR ranges between 0.5% and 4%. CFR is estimated to be more than 5% for individuals with pre-existing conditions such as cardiovascular disease, diabetes, chronic respiratory conditions, hypertension, and cancer, and more than 8% for people older than 70 years old.”

Currently there is no specific treatment available for this disease other than supportive care. There are some antivirals and other treatments currently being used to treat patients. So far, fatality is most common in older patients, with more than 80% of deaths occurring in people over 60 years of age, more than 40% of whom have one or more pre-existing known co-morbidities, including cardiovascular disease, diabetes, and malignancies. It is also important to note that people who are more than 60 years old are generally at higher risk for any type of pneumonia and not just COVID-19 pneumonia. For these reasons, an overall increase in cases of the virus does not imply a commensurate increase in fatalities.

In countries with robust healthcare systems, any imported cases would most likely be contained with few or no transmissions to additional people—provided that cases are rapidly identified, and appropriate infection control protocols are followed. However, the current increase in the number of cases in some countries outside of China shows that there has been silent transmission that started in clusters and expanded to communities before health officials were able to contain them completely.

AIR continues to monitor the COVID-19 outbreak and will provide updates as warranted.