Zurich, Switzerland (Sept. 7, 2019) – The world economy is less resilient now than in 2007 at the onset of the global financial crisis, according to the new Macroeconomic Resilience Indices jointly developed by Swiss Re Institute (SRI) and the London School of Economics (LSE). By contrast, separate insurance resilience indices show that the resilience of households against three main areas of risk – natural catastrophes, mortality and healthcare spending – has improved in most regions since the turn of the century, according to the latest sigma report. Insurers could boost global financial resilience by closing a record-high USD 1.2 trillion composite protection gap for the three areas of risk.

“It is a trillion-dollar opportunity for the insurance industry,” said Jerome Jean Haegeli, Group Chief Economist at Swiss Re. “The insurance industry has largely kept pace with growing loss potentials and can do more to improve resilience. Emerging markets, in particular, benefit more strongly from insurance protection than mature economies, which often have greater access to alternative sources of funding.”

A holistic view at macroeconomic resilience

The new macroeconomic resilience indices use data from 2007 to 2018 for 31 countries, representing about 75% of the world gross domestic product (GDP). They are composed of a broad spectrum of variables to provide a more holistic assessment of economic health than GDP alone. The analysis shows that 80% of the sample countries had lower resilience scores in 2018 than in 2007. The main drivers of this trend have been exhaustion of monetary policy options in many developed economies and a challenging operating environment for the banking sector, even as financial institutions are stronger since the crisis.

“Considering the 35% probability of recession in the US next year and the global ramifications thereof, it is more important than ever to assess the underlying resilience of our economies and look beyond the traditional GDP measures,” Haegeli continued. “In aggregate, policy buffers against economic shocks today are thinner than in 2007. Ultra-accommodative monetary policy over the past years leaves limited future room to maneuver for central banks, while increasing their dependency on financial markets. Coupled with insufficient progress on structural reforms, this is likely to result in more protracted recessions in the future.”

According to the analysis, Switzerland and Canada have consistently been among the top three most resilient countries over the past decade. The US has shown a steady improvement from a low point in 2010. Last year, it ranked third, given strong economic fundamentals, efficient labour and deep capital markets, as well as fiscal leeway to mitigate an economic shock.

By region, North America (US and Canada) was the most resilient region in both 2007 and 2018, despite seeing a slight decline over the period. As Figure 1 shows, Latin America was the only region that recorded an improvement in economic resilience, although at a low level due to structural challenges. The region’s capital markets are not sufficiently developed, labour markets show low productivity and a significant part of the population remains vulnerable to falling back into poverty. 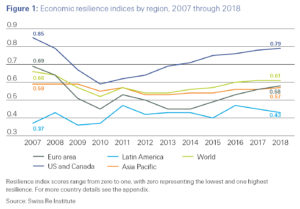 The euro area suffered the biggest decrease in resilience, reflecting fragile fiscal positions in some countries, exhaustion of monetary policy options, a still challenging environment for the banking system, labour market inefficiencies and, in relative terms, underdeveloped financial markets. Peripheral countries in the euro area are much less resilient than the core economies, primarily because of lower fiscal resources and weaknesses in the banking sector. However, even the recovery of resilience levels in Germany and France since post-crisis lows has been non-linear and slow.

“Progressing and finalizing the European Capital Market Union will be key to improving resilience in the euro area,” Haegeli said. “This would deepen financial markets and diversify the region’s funding sources, taking some pressure off monetary policy. Moving forward with bank consolidation as well as overhauling labour markets are also top priorities.”

Separate to the macroeconomic indices, SRI has also constructed Insurance Resilience Indices, based on measures of protection available relative to that needed. The indices consider how insurance helps households withstand the following shock events: natural catastrophes, death of a household’s main earner and healthcare spending. Taking a longer-term view than for the macroeconomic indices, SRI found that the protection gap for the three risk areas combined more than doubled between 2000 and 2018 to USD 1.2 trillion, a record high.

In relative terms, resilience has improved in most regions since the turn of the century. As Figure 2 shows, the aggregate index for the three perils improved in both the advanced and emerging markets, with the world index slightly lower because of the increasing economic weight of emerging markets. The key takeaways at individual peril level are the increase in aggregate advanced market resilience to natural catastrophe risks (an 8 percentage point improvement), and the strengthening of mortality protection in the emerging markets (up 9 percentage points). Notable also is the progress made in closing the health protection gap in Asia Pacific.

For the US and Canada, the composite insurance resilience index for the region improved by 2 percentage points to 65% in relative terms, meaning that almost two thirds of all estimated protection needs from the three main risks are currently covered by available resources, including insurance.

Underlying the modest uptick in resilience was strong improvement in natural catastrophe protection, which increased 11 percentage points to 40% – the third-highest level behind Oceania and advanced economies in Europe. At the same time, mortality protection declined in relative terms, driven by developments in the US, where wage replacement needs and debt have grown faster than accumulated financial assets and nearly stagnant life insurance coverage since the turn of the century.

The aggregate insurance protection gap for the three risk areas has increased 20% to USD 208 billion since the turn of the century.

The sigma No 5/2019 report, “Indexing resilience: a primer for insurance markets and economies,” is available electronically from the Swiss Re Institute.

The Swiss Re Group is one of the world’s leading providers of reinsurance, insurance and other forms of insurance-based risk transfer, working to make the world more resilient. It anticipates and manages risk – from natural catastrophes to climate change, from ageing populations to cyber crime. The aim of the Swiss Re Group is to enable society to thrive and progress, creating new opportunities and solutions for its clients. Headquartered in Zurich, Switzerland, where it was founded in 1863, the Swiss Re Group operates through a network of around 80 offices globally. It is organised into three Business Units, each with a distinct strategy and set of objectives contributing to the Group’s overall mission. For more information, please visit www.swissre.com.