“Still, we must do better.” – Hon. Joe Hargrave

Regina, SK (Aug. 2, 2019) – The number of people hurt or killed in traffic collisions on Saskatchewan roads continues to trend downwards, with substantially lower numbers in 2018 than the previous 10-year average.

Preliminary data for 2018 from SGI indicates there were 4,220 people injured and 129 people killed due to vehicle collisions on public roads in Saskatchewan. This represents a 34 per cent drop in injuries and a nine per cent drop in deaths, compared to the yearly averages from 2008-2017 (injuries: 6,353; deaths: 142).

Another positive sign: there were fewer total casualties in 2018 across each of the “Big Four” categories – impairment, distraction/inattention, speeding/aggression, and improper occupant restraint (i.e. seatbelts, car seats and booster seats), compared to the 10-year average. See the attached infographics for more information.

“As a province, we are steadily making progress, and I want to thank the people of Saskatchewan who decide to drive sober, avoid distractions, obey speed limits and buckle up,” said Minister Responsible for SGI Joe Hargrave. “Still, we must do better. These are not simply numbers on a spreadsheet – these are human beings. Vehicle collisions injure and kill far too many people every year, and most of those deaths and injuries are preventable.”

Since nearly every fatal collision involves at least one of the “Big Four” factors, there are a few simple steps everyone can take to contribute to making Saskatchewan’s roads safer:

“Our goal is the safest roads in Canada,” Minister Hargrave said. “We will continue to focus our efforts to eliminate traffic deaths and injuries altogether, and while we might not be there yet, we will keep working to prevent as many as we possibly can to spare victims and their loved ones from unnecessary pain.” 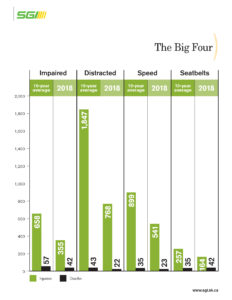 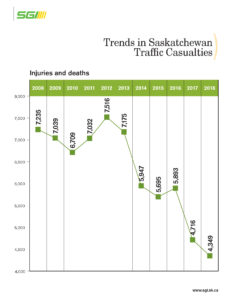 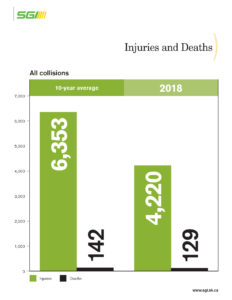