Nearly 9 in 10 Canadians feel their home is their most important possession, while personal keepsakes and technology rank highly, according to the study

Markham, ON (June 21, 2017) – When it comes to possessions they treasure, home is truly where the heart is in Canada, as Canadians say they value their homes above all else. These are the findings of a new poll commissioned by Allstate Insurance Company of Canada, which also found that family keepsakes and personal technology items rank highly among the possessions thought to be the most important.

“For Canadians, our possessions are often more than just the ‘stuff’ we own – they represent our memories, our hobbies, our keepsakes, and the things we worked hard to achieve,” says Dave MacInnis, Vice President of Product Operations, Allstate Insurance Company of Canada. “What we learned from our poll is that while Canadians care about their belongings, there are particular items that are closer to their hearts and those are the items that matter the most.”

Home is valued above all else

When it comes to their most treasured goods, Canadians far and wide put their home at the top of the list. At a provincial level, certain generations came in even higher than the national average, including millennials in Nova Scotia (98 per cent), Gen-Xers in Alberta (90 per cent), and baby boomers in Ontario (95 per cent) and Alberta (93 per cent).

Canadians recognize that not all personal effects are replaceable. While nearly 8 in 10 (78 per cent) consider their personal keepsakes and family heirlooms to be important to them, these items ranked as the top selection to salvage in the event of an emergency, with 4 in 10 (42 per cent) opting to grab these items first; aside from their family members and pets.

Provincially, residents of New Brunswick consider these items to be even more important than their home, with 83 per cent indicating their personal keepsakes and family treasures are important to them, compared to 75 per cent who say the same about their home. Millennials in Nova Scotia (93 per cent) and New Brunswick (84 per cent) were also more likely to say that these items are important, while millennials in Alberta were less likely to say the same (70 per cent).

There is a lot of value in personal technology

In today’s growing digital world, Canadians recognize the importance of staying connected. Nearly 6 in 10 (58 per cent) consider their personal technology to be important to them, and nearly one-third (30 per cent) would grab it first in an emergency situation.

Canadians take pride in their homes

Canadians not only cherish their homes – they also take a lot of pride in them, as more than two-thirds (68 per cent) have made an upgrade to their home in the past five years. Across Canada, millennials were less likely to have made an upgrade to their home compared to the rest of Canada, especially in Alberta where they placed well below the national averages across the board (59 per cent).

“Canadians have a sense of pride in their home because it’s more than just a dwelling – it’s at the centre of their memories and dreams,” says MacInnis. “At Allstate, we know that every family has unique needs, which is why we work with our customers to ensure they have the right coverage for their home. Your home will likely be your largest purchase, the place you raise family and your oasis. Your insurance coverage should reflect that.”

It’s not all about our things

As much as Canadians love their belongings, it is not the only thing they value. The poll found that the top item Canadians are saving up for, with one-quarter (24 per cent) of respondents indicating this, are vacations and other experiences. Other items worth putting money aside for include a home (15 per cent) and vehicle (13 per cent).

Generationally, millennials are significantly more likely to indicate they’re saving up for a home (24 per cent, compared to 15 per cent nationally). This is especially true in markets like Ontario (28 per cent) and Alberta (30 per cent), where housing costs have been higher.

What you see is what you get

Your belongings can say a lot about you and what you value. When asked, 4 in 10 Canadians (42 per cent) say that their possessions reflect that they put their family first. Nearly one-third (30 per cent) feel that what they own shows that they love their creature comforts and that their most treasured possessions, regardless of what they are, are invaluable to them. Baby boomers were found to have a stronger response to putting their family first than the national average (52 per cent).

“No matter what your belongings say about you, it’s safe to assume they hold a special place in your heart,” says MacInnis. “This is why Canadians should consider having an annual conversation with their insurance provider to confirm that they have the right coverage in place.”

Allstate Canada has prepared a blog article to further demonstrate how Canadians view their possessions. For more details about how to keep one’s home safe, visit Allstate Canada’s GOOD HANDS® blog at goodhandsadvice.ca. 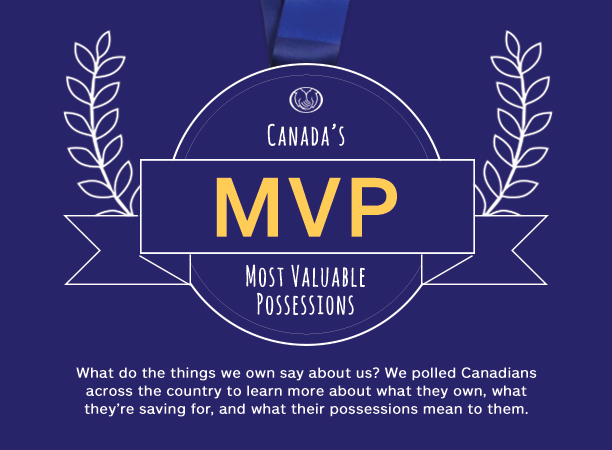 What Canadians Value Most: Most Valuable Possessions survey (Allstate Canada)

About the Léger Survey

About Allstate Insurance Company of Canada

Allstate Insurance Company of Canada is one of the country’s leading producers and distributors of home and auto insurance products, including usage-based insurance, serving Canadians since 1953. The company strives to keep its customers in “Good Hands®” as well as its employees, and has been listed as a Best Employer in Canada for five years in a row. Allstate Canada is committed to making a positive difference in the communities in which it operates and has partnered with organizations such as the Mothers Against Drunk Driving (MADD Canada), United Way, Junior Achievement, and Old Brewery Mission.