Zurich (Mar. 29, 2017) – Total economic losses from natural catastrophes and man-made disasters amounted to USD 175 billion in 2016, almost twice the USD 94 billion seen in 2015, the latest sigma study from the Swiss Re Institute says. Global insured losses from disasters were USD 54 billion in 2016, up from USD 38 billion in the previous year. The losses in 2016 – both economic and insured – were the highest since 2012 and reversed the downtrend of the last four years. This was due to a high number of sizable disaster events, including earthquakes, storms, floods and wildfires in 2016, across all regions. Some events struck areas with high insurance penetration, which accounted for the 42% increase in insured losses. That also means that many people in those areas were better equipped to recover from the shock of a disaster, for example with prompt settlement of their insurance claims.

Globally there were 327 disaster events in 2016, of which 191 were natural catastrophes and 136 were man-made. In total, the disasters resulted in economic losses of USD 175 billion, almost double the level in 2015. As in the previous four years, Asia was worst hit in terms of the number of disaster events (128) and resulting economic losses (approximately USD 60 billion). The earthquake on Kyushu Island, Japan in April inflicted the heaviest economic losses, estimated to be between USD 25 billion and USD 30 billion. Worldwide, around 11 000 people lost their lives or went missing in disasters in 2016, down from more than 26 000 in 2015.

Notable increase in insurance payouts in 2016

Global insured losses last year were USD 54 billion, significantly higher than in 2015 and in line with the inflation-adjusted annual average of the previous 10-years (USD 53 billion). Natural catastrophes resulted in claims of USD 46 billion, the same as the 10-year annual average. Insured losses from man-made disasters were USD 8 billion, down from USD 10 billion in 2015.

“In 2016, both economic and insured losses were close to their 10-year averages. Insured losses made up about 30% of total losses, with some areas faring much better because of higher insurance penetration,” says Kurt Karl, Chief Economist of Swiss Re. For example, North America accounted for more than half the global insured losses in 2016. This was largely due to a record number of severe convective storm events in the US, and the level of insurance penetration for such storm risks in the US is high. The costliest was a hailstorm that struck Texas in April, resulting in economic losses of USD 3.5 billion, of which USD 3 billion were insured, so about 86% of losses were covered. Many households and businesses were insured, and they were well covered for the heavy damage to property caused by large hailstones.

A year of disasters across many peril types and all regions

In terms of devastation wreaked, there were large-scale disaster events across all regions in 2016, including earthquakes in Japan, Ecuador, Tanzania, Italy and New Zealand. In Canada, a wildfire across the wide expanses of Alberta and Saskatchewan turned out to be the country’s biggest insurance loss event ever, and the second costliest wildfire on sigma records globally. There were also a number of severe flood events in 2016, in the US, Europe and Asia, and there was Hurricane Matthew, the first Category 5 storm to form over the North Atlantic since 2007. Matthew caused the largest loss of life – more than 700 people died, mostly in Haiti – of a single event.

Table 1 indicates the large opportunity for insurance to help strengthen worldwide resilience against disaster events. The shortfall in insurance relative to total economic losses from all disaster events – the protection gap – was USD 121 billion in 2016. Insurance coverage is not universal. For example, while a high-level of insurance penetration in New Zealand meant that households and business were well equipped to recover from the damage caused by the quake that struck the South Island in October 2016, in Japan’s Kyushu Island only around 20% of the economic losses from the earthquake in April were covered by insurance. And in Ecuador, the quake on the same day in April caused estimated economic losses of USD 4 billion, but insured losses of just USD 0.5 billion. “In many parts of the world, insurance can play a much bigger role in helping households and communities recover from the losses and shock that disasters can inflict”, Karl continues.

One area where communities benefitted from having insurance in 2016 were the wide expanses of Alberta and Saskatchewan in Canada, which were engulfed by wildfires from May through to July. This was just one of many wildfires in North America last year, sparked by severe dry weather conditions. It was also the most destructive wildfire, burning many buildings and 590 000 hectares of forest land. Many homes were destroyed and around 88 000 people were evacuated from the impacted areas. Overall economic losses from the fires were USD 4 billion, of which close to USD 2.8 billion (70%) were covered by insurance. Once the evacuation order had been lifted, insurance personnel was given immediate access to the affected regions in order to assist returning residents. There were record payouts by insurers and 68% of all personal property claims had been settled by the end of the year.

Floods in many regions

There were also many severe precipitation events in 2016, which in turn triggered major flooding over large areas. At the end of May and the beginning of June thunderstorms, torrential rain and flooding – river and flash floods – hit France, southern and central Germany and Belgium, leading to combined economic losses of USD 3.9 billion, and insured losses of USD 2.9 billion. In China, there was extensive flooding along the Yangtze River basin in July. The economic losses were estimated to be USD 22 billion, making it the costliest Yangtze River flood event since 1998. Here, however, with low insurance penetration, the insured losses were just USD 0.4 billion.

The US was also hit by floods. There were four separate multi-billion dollar-loss floods in 2016, the worst being the inland flooding of southern Louisiana and Mississippi in August. The topography of southern Louisiana – largely wet and low-lying land through which many rivers run – makes the region vulnerable to flooding. The banks of many rivers burst after extreme rainfall, resulting in widespresad flooding of adjacent areas, and accumulated economic losses of USD 10 billion. In the US, however, flood risk remains critically underinsured, even though much of the country is exposed to flooding. In the case of the Louisiana and Mississippi floods, less than a third of the economic losses – around USD 3 billion – were covered by insurance. This sigma includes a special chapter on the level of under-insurance of flood risk in the US. 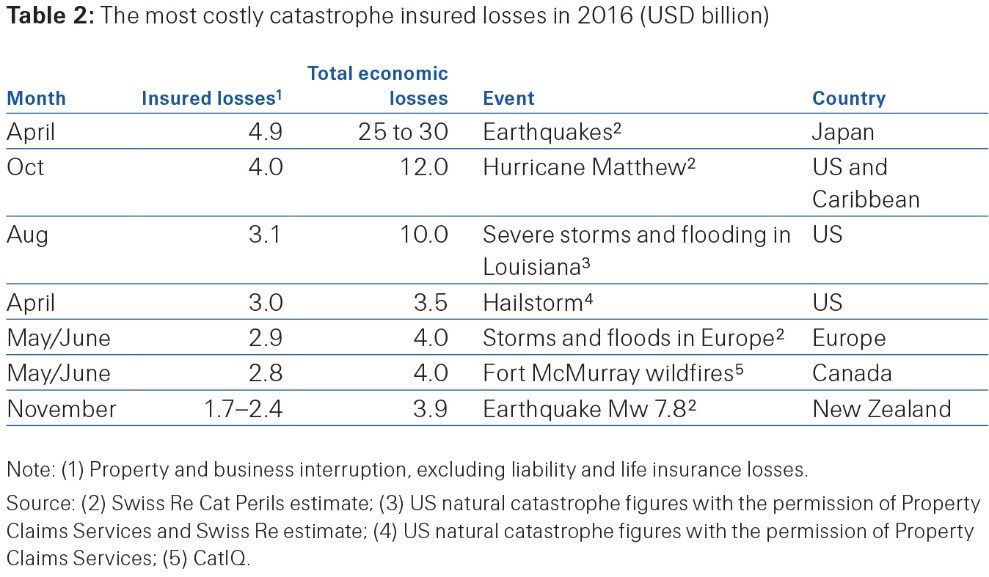 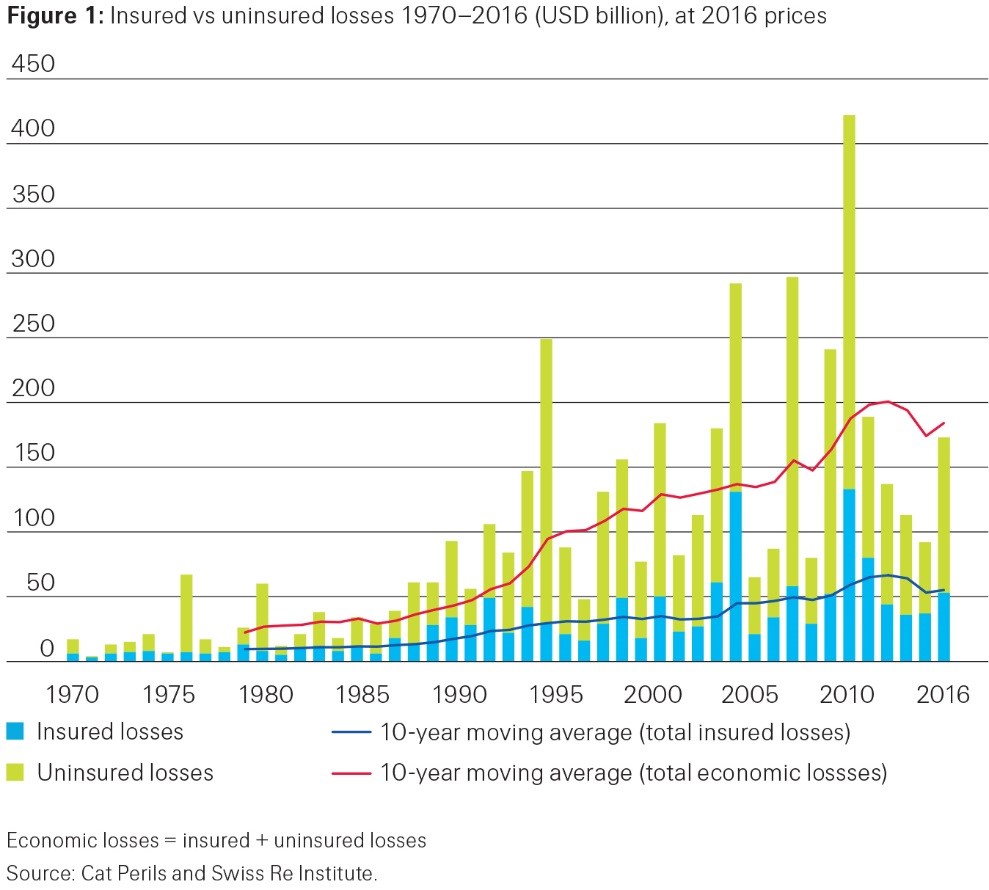 The data from the study can be accessed and visualised at www.sigma-explorer.com. This mobile enabled web-application allows users to create charts, share them via social media and export them as standard graphic files.

The English, German, French, and Spanish versions of the sigma No. 2 /2017, Natural catastrophes and man-made disasters in 2016: a year of widespread damages are available in the sigma section.

Printed editions of sigma No. 2/2017 in English, German, French and Spanish are available. The printed versions in Chinese and Japanese will be available in the near future.

The Swiss Re Group is a leading wholesale provider of reinsurance, insurance and other insurance-based forms of risk transfer. Dealing direct and working through brokers, its global client base consists of insurance companies, mid-to-large-sized corporations and public sector clients. From standard products to tailor-made coverage across all lines of business, Swiss Re deploys its capital strength, expertise and innovation power to enable the risk-taking upon which enterprise and progress in society depend.

Founded in Zurich, Switzerland, in 1863, Swiss Re serves clients through a network of around 80 offices globally and is rated “AA-” by Standard & Poor’s, “Aa3” by Moody’s and “A+” by A.M. Best. Registered shares in the Swiss Re Group holding company, Swiss Re Ltd, are listed in accordance with the International Reporting Standard on the SIX Swiss Exchange and trade under the symbol SREN.

For more information about Swiss Re Group, please visit www.swissre.com.