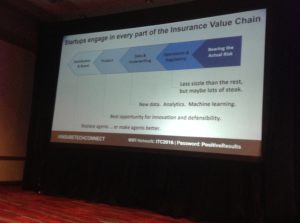 In the late days of 2015, we projected that 2016 would have one overarching driver for insurers and brokers: digital transformation. All things being equal, I think we hit a chord that resonated. However, there was a parallel trend that made the acoustics a little strange.

In 2015, there were early indications of a digital revolution. Some large companies had started experiments with new digital projects being developed in innovation centres around the world.

By the end of the year, the momentum had built, and we wrote: “the days for muddling are over.”

And we suggested that data and analytics, running on smart machines, would be the catalysts for momentum.

This started to take  hold in Canada…

The 2016 Insurance-Canada Technology Conference and Broker Forum (ICTC2016 / ICBF2016) became a platform for Digital. We had presentations from insurers, brokers, analytsts, consultants, and suppliers about new digital approaches and the benefits. A keynote panel of senior executives made it clear that digital was a business imperative.

This theme was echoed at the 2016 Insurance-Canada Executive Forum (ICEF2016), with a strong twist: Insurers were deep into implementing digital tools to support business transformation processes.

Aviva Canada CIO, Ben Isotta-Riches described the digital transformation initiative he was directing, which allows a large organizations, with ‘legacy’ policies and processes to transform into an organization that runs like a ‘digital native’.

Economical Insurance executives – Alice Keung, SVP & CIO and Michael Shostak, SVP & CMO – were leaders in the roll out of a new company – Sonnet – which uses a direct to consumer strategy. At ICEF2016, Keung and Shostak described the key to Sonnet’s success: to provide personally customized insurance coverage with a minimum of effort by the customer by utilizing data, analytics, and modern technology.

Then along came InsurTech

According to Hubio, the first use of “InsurTech’ was in a July 2015 presentation by Financial Technology Partners. It’s definition encompassed 4 trends:

However, it seems that – in my humble opinion – ‘InsurTech’ has become as much a rallying cry distraction as it is a description.

And, as such,’InsurTech’ is frequently used in the economics of technology investment; viz., the ‘value’ of an Insurtech company has less to do with the ROI of customers than the potential IPO price of the nascent InsurTech company.

Aside: We’ve seen this movie before

Back in the late days of the 20th century – a few short years after Al Gore invented the commercial internet – Silicon Valley was awash in Venture Capital  money. For a while, Start-ups could get significant funding by simply putting dot-com after their name.

This ‘dot-com bubble’ ended badly for many.  By July 2016, the Nasdaq had clawed its way back to the March 2000 high.  But some memories are long.

So what does InusrTech mean for digital transformation?

Some insurance companies are excited by the potential of InsurTech as they understand it, and are continuing investments. Others are seeking shorter term solutions from individual products that would offer an opportunity to experience digital.  Still others are still reluctant to jump in, not knowing what is real, and what is a really good pitch deck.

This uncertainty has put some brakes on early stage digital transformation projects and programs. However, for the organizations that had serious programs underway, we have not seen any turning back.

We’ll be putting our thoughts on the 2017 picture in our next post. For now, we’d like to thank all of you who follow this blog, and our other publications and events.   And we wish you all the best for the holiday season.