Edmonton, AB (Oct. 19, 2016) – The Fort McMurray wildfire this past spring brought with it disruption—of people’s lives and businesses. It was the third time in the last five years that an Alberta natural disaster caused the evacuation of entire communities. Homes and businesses were destroyed, followed by massive cleanup and rebuild efforts.

ATB Financial’s latest Business Beat survey discovered that 23 per cent of Alberta-based small and mid-sized enterprises (SMEs) have experienced a significant disruption in their business. Despite this, 46 per cent of businesses surveyed said they did not carry disruption insurance.

“Disasters, both natural and personal, happen. And by nature of the definition, they strike quickly and without warning,” said Teresa Clouston, ATB’s Executive Vice-President, Business & Agriculture. “So a plan that contemplates how to deal with disruption can allow business owners to respond from a position of strength and thoughtfulness versus panic. We recommend building a recovery plan into your business plan and revisiting that plan yearly.”

On the topic of succession planning, nine out of 10 (91%) respondents acknowledged its importance. However, just over half of Alberta SMEs (58 per cent) have a succession plan in place. Among business owners who have a plan, the most common approach is to sell or transfer the business to a family member (48 per cent). Thirty-four per cent plan to sell their business to a third party, while 32 per cent hope to sell their company to existing management or other employees.

“We’re seeing a common theme in these survey results,” added Clouston. “Business owners clearly realize the importance of continuity and succession planning, even identify such planning as a priority, but many don’t seem to have the time or resources to do either. We get that. ATB relationship managers and entrepreneurship teams are here to listen and help. Plus, we’ve just established an advisory services team and have access to a lot of great resources we can connect entrepreneurs with to begin, or continue, this critical conversation.”

Meanwhile, the ATB Business and Economy Indexes both took a downward dip. The ATB Business Index, which measures business owners’ optimism in their own operations, fell to 43.6, down from 47.3 in the previous survey. The ATB Economy Index, which measures business owners’ confidence in the Alberta economy, dropped nearly three points, from 32.3 in the last survey to 29.6. A score above 50 indicates more respondents are feeling optimistic. A score below 50 suggests more respondents are feeling pessimistic. 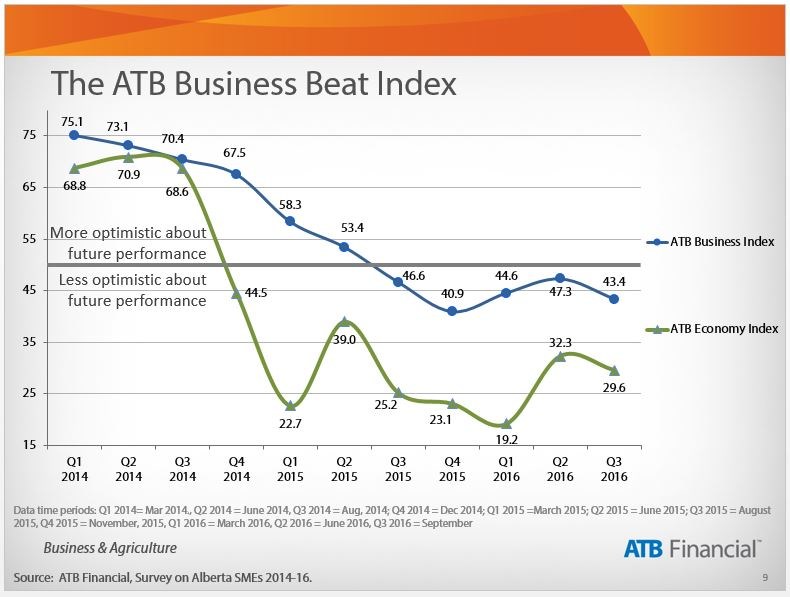 At ATB Financial, we put people first. We’ve been doing it for more than 75 years. In that time, we’ve grown from one small Treasury Branch to become the largest Alberta-based financial institution, with assets of $46.8 billion. Today, 5,065 team members help more than 730,000 customers in 244 Alberta communities. Like our clients, we’re Albertans.

Through a network of 173 branches, 136 agencies, and a Customer Care Centre, we work beside them and with them in their communities, and we root for their success because it’s our success too. ATB was named one of Canada’s 50 Best Employers in 2015 by Maclean’s Magazine in partnership with Aon Hewitt – in fact we made to the top 10! In 2014, ATB was also named one of Alberta’s top 65 employers and one of Canada’s Best Employers for Young People by Mediacorp Canada Inc., one of Canada’s Passion Capitalists by Knightsbridge, and one of the 50 Most Engaged Workplaces in Canada by Achievers.