The external pressures on insurance rates in B.C. are very real and they’re accelerating, including an escalation in the number of crashes, the number of claims being filed and the cost of settling those claims:

“We certainly don’t like to have to ask our customers to pay more but these external pressures are very real and they have created a perfect storm which we are struggling to hold off,” said Mark Blucher, ICBC’s president and CEO. “We’ve worked hard to get this rate increase lower than last year’s but the amount of basic premiums we collect will still not cover the increasing amount we’re paying out in basic claims costs.”

To cover the costs of more crashes and more claims, ICBC would need to charge every customer approximately an extra $130 a year, which would have required a rate increase of 15.5 per cent.

In partnership with government, ICBC has implemented various initiatives aimed at alleviating the escalating pressures on auto insurance rates in British Columbia:

“It would not be right to increase our customers’ rates without first doing everything we can to hold off these rising external cost pressures,” said Blucher. “We’re looking at how other jurisdictions are dealing with some of the same challenges. However, all of the efforts we’re making won’t make the underlying causes of the rate increase go away on their own. We also need help from all British Columbians to help keep our roads safe. By driving safely you can help lower our claims costs and directly lower the rates you pay.”

The rising number of crashes, injuries and the cost of these claims, is also putting pressure on ICBC’s optional insurance rates as liability payouts above $200,000 and collision and comprehensive coverage for your vehicle are covered under optional insurance.

The average personal insurance customer who purchases optional extended third-party liability coverage – plus collision and/or comprehensive insurance – can expect to pay an additional $5 per month for their full basic and optional coverage.

Customers can learn more at icbc.com/rate-pressures. 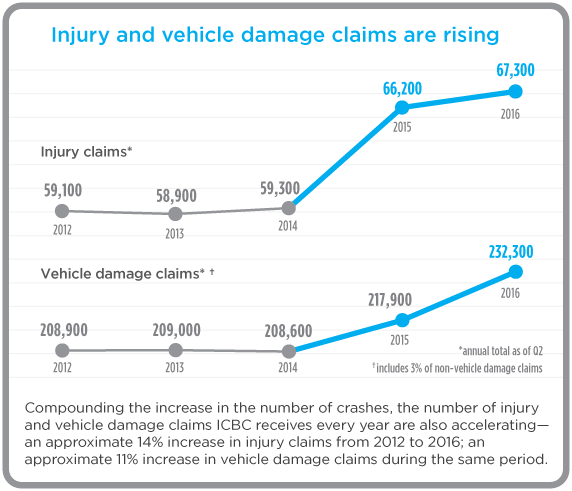 About the Insurance Corporation of British Columbia

The Insurance Corporation of British Columbia is a provincial Crown corporation established in 1973 to provide universal auto insurance to B.C. motorists. We’re also responsible for driver licensing, and vehicle licensing and registration.