Travel, hospitality industry was a big IoT spender in 2015

Toronto, ON (Aug. 2, 2016) – More than 70% of business executives worldwide feel that if they take advantage of the internet of things (IoT), it will have a significant impact on business outcomes. However, according to research, over half also agree that there’s still confusion surrounding the concept. 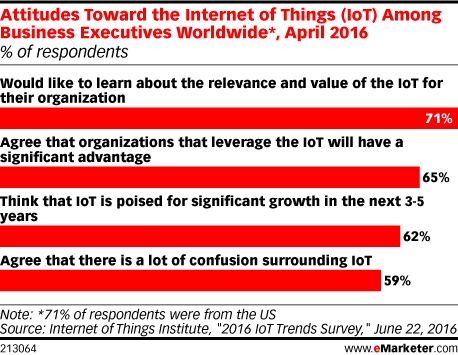 Between March and April 2016, the Internet of Things Institute surveyed 996 business executives worldwide about their attitudes toward the IoT.

According to the data, the majority (71%) of respondents said they are interested in understanding the purpose and significance of the IoT for their business. But perhaps more important, while 65% agreed implementing the IoT would probably put their organization at an advantage, 59% said the concept itself remains muddled.

eMarketer defines the IoT as an interconnected ecosystem of internet-enabled objects, including artificial intelligence software, analytics programs and others.

Aside from the growing pains of understanding the IoT, there’s no question that various industries are allocating more budget to the concept. But which ones, in particular? A July 2015 study from Tata Consultancy Services, found that the global travel and hospitality industry devoted the most spend to IoT—on average about $128.9 million in 2015 per company—compared to other verticals.

But even firms in industries that may not be big IoT spenders quite yet—retailers, for example—feel positive about the advantage it can bring to their organizations. Tata reported retailers worldwide had spent an average of $41.8 million on the concept in 2015. In a separate August 2015 study from Retail Systems Research, more than half of retailers said they believed the IoT is poised to dramatically change the way companies do business in the next three years.

By gathering the latest research and news from over 1,000 sources, eMarketer has established itself as the world’s leading provider of internet and e-business statistics. eMarketer’s Web site is at www.emarketer.com.

eMarketer bases all of its forecasts on a multipronged approach that focuses on both worldwide and local trends in the economy, technology and population, along with company-, product-, country- and demographic-specific trends, and trends in specific consumer behaviors. We analyze quantitative and qualitative data from a variety of research firms, government agencies, media outlets and company reports, weighting each piece of information based on methodology and soundness.

In addition, every element of each eMarketer forecast fits within the larger matrix of all its forecasts, with the same assumptions and general framework used to project figures in a wide variety of areas. Regular re-evaluation of each forecast means those assumptions and framework are constantly updated to reflect new market developments and other trends.