Zurich (Mar. 30, 2015) – According to the latest sigma study, global insured losses from natural catastrophes and man-made disasters were USD 35 billion in 2014, down from USD 44 billion in 2013 and well below the USD 64 billion-average of the previous 10 years. There were 189 natural catastrophe events in 2014, the highest ever on sigma records, causing global economic losses of USD 110 billion. Around 12 700 people lost their lives in all disaster events, down from as many as 27 000 in 2013, making it one of the lowest numbers ever recorded in a single year.

Total economic losses from all disaster events in 2014 were USD 110 billion, down from USD 138 billion in 2013, and well below the previous 10-year annual average of USD 200 billion. Of these total economic losses, USD 101 billion were due to natural catastrophes, with cyclones in Asia Pacific causing the most damage. Of the USD 35 billion in global insured losses last year, USD 28 billion were attributed to natural catastrophe events.

Weather events in the US, Europe and Japan cause most insured losses

“The frequency of catastrophic events appear to be increasing, with a record number of natural catastrophes last year,” says Kurt Karl, Swiss Re’s Chief Economist. For example, a series of severe thunderstorms triggered sizable losses in both the US and Europe last year. In May, a spate of severe storms with hail in the US resulted in the largest insured loss event of the year, with insurance claims of USD 2.9 billion.

In Europe in the following month, the low pressure system Ela brought large and damaging hail to parts of France and Belgium, and strong winds in Germany. The combined insured losses were USD 2.2 billion, making Ela the second most expensive hail event in Europe on sigma records.

Harsh winters in the US and in Japan were another major cause of insurance claims in 2014. The US experienced multiple storms with heavy snow and long stretches of freezing temperatures. Insured losses from all winter storms in the US were USD 2.4 billion, more than double the average of the previous 10 years. The largest loss event was a storm in January that impacted 17 states, with snow falling as far south as Florida, leading to overall insured losses of USD 1.7 billion. Meanwhile in Japan, a severe cold snap in mid-February brought the heaviest snow in decades, killing 26 people and injuring many more, primarily in road accidents. The insured loss total was estimated at USD 2.5 billion.

It was another quiet hurricane season in the North Atlantic in 2014, with no major hurricane making US landfall for the ninth year in succession. This was the main reason for the overall below-average insured losses last year. In contrast, there were 20 named storms in the eastern Pacific, the most since 1992. Of those, in September Hurricane Odile in the Baja of California, Mexico, caused the biggest event loss. The region is a tourist destination with many hotels and commercial properties and consequently, insurance penetration is relatively high. The insured losses were USD 1.7 billion, making Odile the second largest insured loss event ever in Mexico, after Hurricane Wilma in 2005 which caused insured losses of USD 2.1 billion.

Lack of insurance cover, however, remains an issue in many countries. For example, in May, low pressure system Yvette brought very heavy rain to Serbia, Bosnia and Croatia, in some areas the heaviest downpour in 120 years. Several dams failed and the ensuing floods and debris flows destroyed houses, infrastructure and crops. There were 82 deaths, the largest loss of life from a natural catastrophe event in Europe in 2014, and total losses were estimated to be USD 3 billion, mostly uninsured. Italy also endured a very wet year, with a series of flash floods events causing overall economic losses of more than USD 1 billion, also largely uninsured.

There are areas which are underinsured in the US also. In August last year, the South Napa earthquake caused structural and inventory damage totaling USD 0.7 billion, particularly in the numerous barrel storage facilities of the local wine industry. However, the insured loss was just USD 0.16 billion. “In spite of high exposure to seismic risk, insurance take-up in San Francisco County and California state generally is still very low, even for commercial properties. That’s why insured losses, in certain areas, can be surprisingly low when disaster events happen,” says Lucia Bevere, co-author of the study.

This sigma includes a special chapter on severe thunderstorms, which are also called severe convective storms.(1) The total costs and insured losses of severe convective storms have been on an upward trend over the last 25 years. This is mainly due to rising losses in the US where the frequency of storms (particularly tornadoes) and insurance penetration are highest, and in Europe where hail storms and flash flooding happen often. 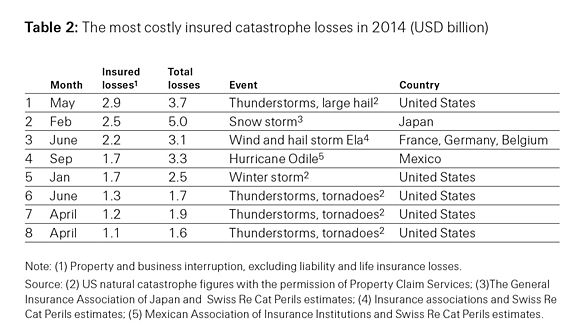 1. Severe convective storms include tornadoes, hail, thunder, heavy rains and flash floods. Generally speaking, a storm is classified as “severe” based on the threshold where damage is expected to occur, typically winds of 90 km/26 miles per hour and/or hail of 2 cm in diametre or more in countries using the metric system and 1 inch or more in US reference terminology.

2. To smooth out the short term-fluctuations and highlight the longer-term trends, the annual growth rate is calculated based on the average of the years 1986-1990 and 2010-2014.

How to order this sigma study

The English, German, French, and Spanish versions of the sigma No. 2/2015, Natural Catastrophes and Man-Made Disasters in 2014: Convective and Winter Storms Generate Most Losses, are available electronically – visit the sigma section.

Printed editions of sigma No. 2/2015 in English, French, German and Spanish are available now.

The Swiss Re Group is a leading wholesale provider of reinsurance, insurance and other insurance-based forms of risk transfer. Dealing direct and working through brokers, its global client base consists of insurance companies, mid-to-large-sized corporations and public sector clients. From standard products to tailor-made coverage across all lines of business, Swiss Re deploys its capital strength, expertise and innovation power to enable the risk-taking upon which enterprise and progress in society depend.

Founded in Zurich, Switzerland, in 1863, Swiss Re serves clients through a network of about 70 offices globally and is rated “AA-” by Standard & Poor’s, “Aa3” by Moody’s, and “A+” by A.M. Best. Registered shares in the Swiss Re Group holding company, Swiss Re Ltd, are listed on the SIX Swiss Exchange and trade under the symbol SREN. For more information about Swiss Re Group, please visit www.swissre.com/.