Do you and your staff have some extra cycles? Specifically, would you mind evaluating three, five, or maybe nine new technologies in your spare time? Just asking, because there might be a few things coming along ….

We’d like your thoughts about the capability of insurance organizations to exploit new technologies. 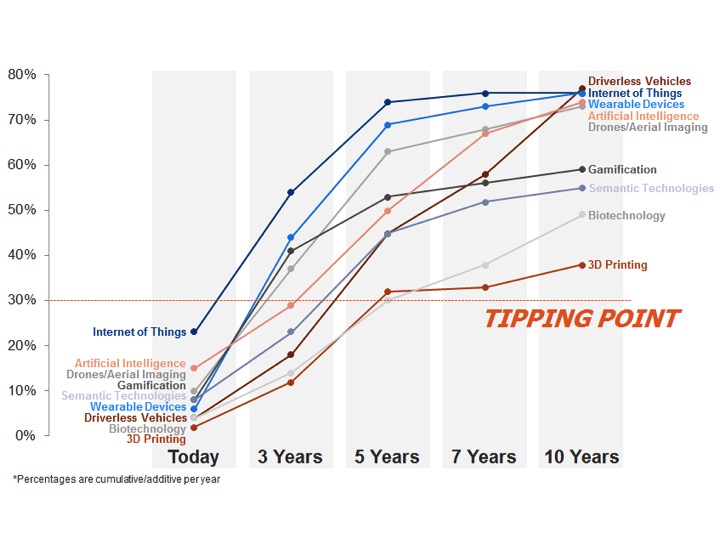 So, after we repealed Moore’s Law …

The opening line of a recent SMA report, Emerging Technologies: Reshaping the Next-Gen Insurer, sets the stage:  “It is difficult to really comprehend how fast emerging technologies are being introduced, experimented with, and adopted.”    To emphasize the point, the report notes:

“Moore’s Law tells us that computing power doubles every 18 – 24 months, but even that seems to be irrelevant compared to the power of emerging technologies, because they are coming faster, and they are more formidable than ever before.”

And, according to Denise Garth, Partner at SMA, and the report’s author,  the emerging technologies are coming along in parallel with the increasing consumer expectations.  SMA advises insurers to commit resources to understand, position, and pilot these technologies sooner rather than later.

Non-trivial, especially in a time when expenses are under the microscope.

What are these technologies?

The report points to 9 technologies that have the prospect of causing serious disruption in the current insurance business model:

The report provides and excellent description of these and how they will impact the insurance industry.

What’s closest to the windshield ….

According to the report, several of these are on track to hit a tipping point of adoption in the next three years.  Let’s take a look at two.

The Internet of Things (IoT)

SMA defines the IoT as “a network of trillions of physical things with embedded technologies that communicate or sense the internal or external environments of that physical thing, including people and animals.”  Based on an SMA survey, the report notes the 3 out of 4 insurers see ‘significant’ investment in this technology in the next 3 years.

There is a compelling business case: SMA believes that new insurance products/services will “redefine the value to the customer and the customer experience.”  The result?  New business/revenue models and new value propositions to counter threats of commoditization.

The use of these technologies to capture data is already in deployment by 10% of insurers now, and is projected to scale rapidly to 37% in three years.

What does this mean for operations?

We might quibble with the report on some fine points, but overall we agree that there are a number of emerging technologies on the horizon that require attention from insurers, brokers, and claims professionals.

However, to exploit these effectively, we need to implement them in tangent with providing facilities for Big Data analytics and have some strategy for integrating with core systems.

Moreover, these are coming on top of existing stresses on Operations and IT; not the least of which is completing legacy systems modernization / replacement initiatives.

Our question is:  where do we find the resources required to evaluate, much less implement,  the new technologies.

Here’s why  they call it ‘Disruption’ …

Garth points to an interesting conundrum:

“Emerging technologies are being introduced and deployed rapidly across a wide array of industries …The result is a paradox for the insurance industry. An industry of tradition … is operating within a rapidly changing world that is inventing new businesses and customer engagement models, and embracing new and emerging technologies.” (Emphasis in original)

We recently reviewed the result of a Celent survey of Canadian insurers which found that the majority did not have the organizational structure to manage innovation well. The SMA report concludes with several recommendations which align with those of Celent.

The most important of which is a strategic allocation of resources to support an innovation structure, including use of emerging technologies.

In past, we would have called this the R&D department.

What do you think?

Do you see  the emergence of new technologies as opportunities?  If so, does your organization have a structure that would allow proper evaluation?  If not, how do you see the selection and resourcing requirements being addressed?