The old adage, “what gets measured, gets done,” was validated again during the agents’ sessions at the ACORD Implementation Forum this week.  And, just as significantly, what got done is forming a platform for better things to come.

Within the U.S. property-casualty community, Agency/Company interface is an industry with a half century of experience.  A number of formal and informal associations have invested hundreds (if not thousands) of person years in meetings, studies, presentations, and hard work to advance the cause of electronically connecting independent distributors with insurance carriers in a manner that makes business sense.

The moniker given to the model and the initiative was ‘Real-time’.

Up until a few years ago, there was precious little hard evidence that indicated this work was making an impact.  However, in 2006, the emergence of the Real-time Campaign, driven by representatives from the agent, carrier, supplier, and association communities, marked a change.

And Real-time produces real data on what works ….

Along with focused promotion activities, Real-time committed to surveying end users, and producing periodic (roughly every 18 months) reports on the impact of the campaign.   The most recent report, completed in 2013, found that there had been significant progress.  For example,

Respondents were asked for obstacles encountered.  And, as is their wont, the agents were not shy in responding.  There were operational issues, such as “It’s not worth the extra expense,” and, “It overwrites too much data.”

The survey ran into the ‘I don’t know squared’ problem:  I don’t know what I don’t know. Asked why Real-time inquiry wasn’t used, agents said: “I don’t know why we don’t,” and, “We did not know this was available in our management system.”

Significantly, agents indicated that the population of carriers supporting standardized transactions did not form a critical mass for their offices, with responses along the lines of, “Too few carriers offer/support transactions we use.”

Agent/carrier connectivity requires mirrored effort on both sides, which means its implementation is dependent on the lowest common denominator.  This can be the carrier (if it does not support a particular function) or on the agent (where the vendor has not supplied the functionality).  Current information on these stumbling blocks has always been challenging to obtain.

Recently, however,  a proxy measure has emerged that will supply some information.

The value of a Value Added Network

In the US, the vast majority of Agency/Carrier connectivity traffic is carried by IVANS, a value added network that was developed for the insurance industry in the early 1980s.  In early 2013, IVANS began measuring agent/carrier connections at a granular enough level in order to determine functional penetration at the level of transaction types.  This allows reporting at the industry and user levels.  The latter and enables users to see capabilities which may not yet be exploited..

Usage of connectivity is impressive.   Data from IVANS shows “over 250 carriers send over 120 million ACORD download messages to 25,000 (independent agent)agencies every year. ”

The opportunities are equally impressive.  The same report notes: “over 40% of all potential downloads from carriers to their agencies were not setup for delivery.” (emphasis supplied).

IVANS’  ‘Connections Report’ supplies information to the agent on available functionality, organized by line of business for the  carriers in the agent’s office (see sample below). 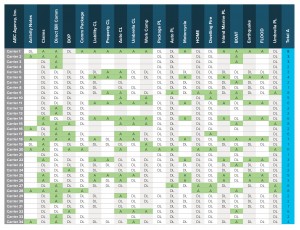 There was an interesting twist at the end of the session. ACORD’s  Cal Durland, who handles much of the day-to-day work of the Real-time campaign, announced that the campaign will be sunset this year. However, she was quick to point out that other initiatives were  being planned and would be announced soon.

No shame there.  Marketing campaigns have to be reviewed and refreshed.

I sense a renewed energy, driven by accurate data.  How about you?