Zurich (June 27, 2014) – Premiums written in the global insurance industry grew by 1.4% in real terms to USD 4 641 billion in 2013 after a 2.5% increase in 2012, says Swiss Re’s latest sigma study. The slowdown was primarily due to weakness in the life sector in the advanced markets. Global life premiums were up just 0.7% in 2013, with weak sales in North America and the advanced Asian markets offsetting a strong performance in Western Europe, Oceania and most emerging markets. Non-life premiums grew by 2.3%, also less than the previous year as growth slowed in the advanced and emerging markets. Overall profitability in the life and non-life sectors improved, despite the impact of still low interest rates on investment returns.

In the life sector, notable developments were a return to premium growth in Western Europe, in spite of weak economic growth. Premiums were up 4.0%, having declined in each of the previous three years. Premium growth also was strong in Oceania (up 9.0%) and in the emerging markets, improving to 6.4% from 5.2%. Growth was solid in Latin American and Africa, and resumed in China and India where regulatory changes had prompted a drop in sales in 2012.

Globally, however, life premiums grew by just 0.7% in 2013 to USD 2 608 billion, down from 2.3% growth in 2012. Premiums in the US contracted sharply by 7.7% due to the non-recurrence of large corporate deals which had boosted group annuity business in 2012. “The sector’s slowdown in US was out of synch with the economic recovery there, ” Kurt Karl, Swiss Re’s Chief Economist, says. “Yes, the economy slowed slightly but last year’s employment and housing market numbers were positive. Even stripping out the effect of those large corporate deals in 2012, US life premiums would still have been down 1.6%.”

Premium growth in the advanced Asian markets was flat relative to the previous year, further offsetting the sector’s strong performance in other regions. A slowing but still solid growth performance in most of the region’s markets was overshadowed by a 12% decline in South Korea where the ending of a tax benefit led to a sharp fall in single-premium product sales.

Global non-life premium growth slowed to 2.3% in 2013 from 2.7% the year before, with total premiums at USD 2 033 billion. In emerging markets non-life premium growth remained strong at 8.3% in 2013 after 9.3% in 2012, and was solid across all regions with the exception of Central and Eastern Europe (CEE). The expansion in emerging Asia was supported by sustained strong growth in Southeast Asia and China. Mahesh Puttaiah, one of the authors of the study notes: “As people get wealthier and acquire more physical assets to protect, for example vehicles, they spend more on non-life insurance products. That is what is happening in many emerging Asian countries.” In India, however, non-life sales growth slowed to 4.1% from 8.9% in 2012, due to a slower economy and weaker business sentiment.

As for the advanced markets, premium growth was just 1.1% in 2013, down from 1.5% the previous year. This was mainly due to a still-depressed market in Western Europe, with premiums down 0.3% due to the weak economic environment. In advanced Asia, premium growth slowed to 1.7% from 4.7% in 2012, mainly due to a sharp tax-reform induced slump in South Korea. In the US, premiums grew steadily by 1.7% and in Canada by 3.2%. Non-life growth in advanced markets has remained soft since the financial crisis in 2008. Premiums increased by an annual average of 0.7% between 2009 and 2013 compared with 1.9% in the 2003-2007 period.

Life premium growth is expected to resume in the advanced and improve in the emerging markets. The firming economy and labour markets in the advanced markets will support the life and non-life sector, and growth in the emerging markets should hold up also. In the life sector, China and India in particular should see a return to higher growth rates.

Overall profitability has improved in the life and non-life sectors. However, investment returns, an important component of insurers’ earnings, remain low given the very low level of interest rates since the 2008 financial crisis. In 2013, interest rates started to rise particularly in the US and UK and will trend up through 2017. This will benefit insurers, but only in a few years time. The average yield on the bond portfolio of a typical life insurer will continue to fall for two to three years because only around 10% of the portfolio is rolled over each year, and the bonds issued 10 years ago have a higher coupon than those issued today. Also, the market value of the portfolio, which had been inflated by low interest rates, will continue to fall as rates rise. 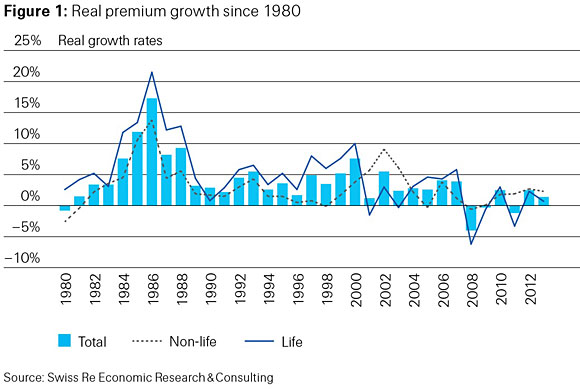 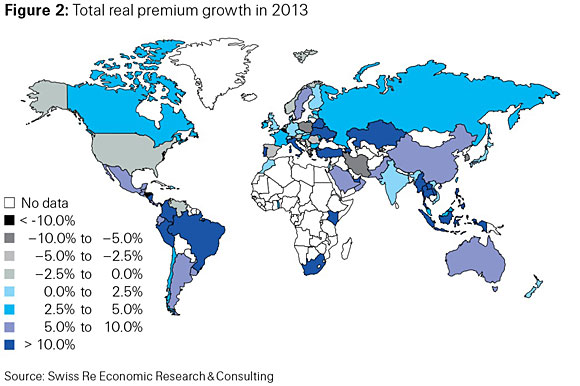 The Swiss Re Group is a leading wholesale provider of reinsurance, insurance and other insurance-based forms of risk transfer. Dealing direct and working through brokers, its global client base consists of insurance companies, mid-to-large-sized corporations and public sector clients. From standard products to tailor-made coverage across all lines of business, Swiss Re deploys its capital strength, expertise and innovation power to enable the risk-taking upon which enterprise and progress in society depend. Founded in Zurich, Switzerland, in 1863, Swiss Re serves clients through a network of over 60 offices globally and is rated “AA-” by Standard & Poor’s, “Aa3” by Moody’s, and “A+” by A.M. Best. Registered shares in the Swiss Re Group holding company, Swiss Re Ltd, are listed on the SIX Swiss Exchange and trade under the symbol SREN. For more information about Swiss Re Group, please visit www.swissre.com/.

The data from the study, including historical data back to 1980, can be accessed on the interactive web application sigma explorer. This mobile enable web-application allows users to create charts, share them via social media and export them as standard graphic files (a short instructional video on the sigma explorer can be found here).