Total economic losses to the society (insured and uninsured) for the first half year’s disasters were almost USD 278 billion. Approximately 26 000 people lost their lives in catastrophes in the first six months of 2011, most of them in Japan.

With more than USD 70 billion in insured catastrophe losses in the first half year alone, 2011 already ranks as the second most expensive year according to sigma records. This figure was only surpassed in 2005 when total catastrophe claims amounted to USD 120 billion, with hurricanes Katrina, Wilma and Rita causing claims of over USD 90 billion. 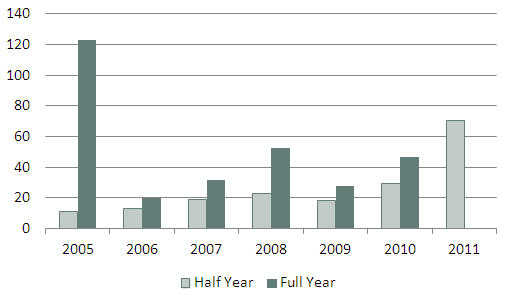 Thomas Hess, Swiss Re’s Chief Economist, says: “Given the many people who died in Japan and the sad experiences in New Zealand, 2011 will certainly go down as another year of very tragic earthquakes. In terms of catastrophe claims, 2011 is already the second costliest year in history for the insurance industry. Additional claims from the ongoing US hurricane season or expensive winter storms in Europe have the potential to bring figures for the full year even closer to the record claims of USD 120 billion experienced in 2005.”

For more information and facts on the first half year 2011 industry loss estimates, please download our factsheet.

Swiss Re is a leading and highly diversified global reinsurer. The company operates through offices in more than 20 countries. Founded in Zurich, Switzerland, in 1863, Swiss Re offers financial services products that enable risk-taking essential to enterprise and progress. The company’s traditional reinsurance products and related services for property and casualty, as well as the life and health business are complemented by insurance-based corporate finance solutions and supplementary services for comprehensive risk management. Swiss Re is rated “A+” by Standard & Poor’s, “A1” by Moody’s and “A” by A.M. Best. http://www.swissre.com/