Insurance-Canada.ca presented results of two surveys on insurance practitioners’ use of social media in Canada during a webinar on Tuesday, August 23.  Results tracked with some information from elsewhere, but provided a few surprises as well.

The open surveys were conducted earlier in the summer.  The first, focusing on how much different groups were using social media, attracted 311 responses.  Three major groups within the insurance community – insurers, brokers, and suppliers – were equally represented in the results with 25% each.  The remaining 25% classified themselves as ‘other’.

The survey results  suggest that less than 50% of the community are using social media for business purposes at all.  Within the community, brokers had the lowest utilization level for business at just over 40%.  This tracks with a survey we reported on, conducted by IVANS earlier in the year.

With respect to which media are being used, the Insurance-Canada survey found that LinkedIn was the preferred medium for business use, which tracks with results from other sources.   A bit of a surprise came from  a look at personal use,which indicated that for insurers LinkedIn came a close second to Facebook, especially for insurers and suppliers. 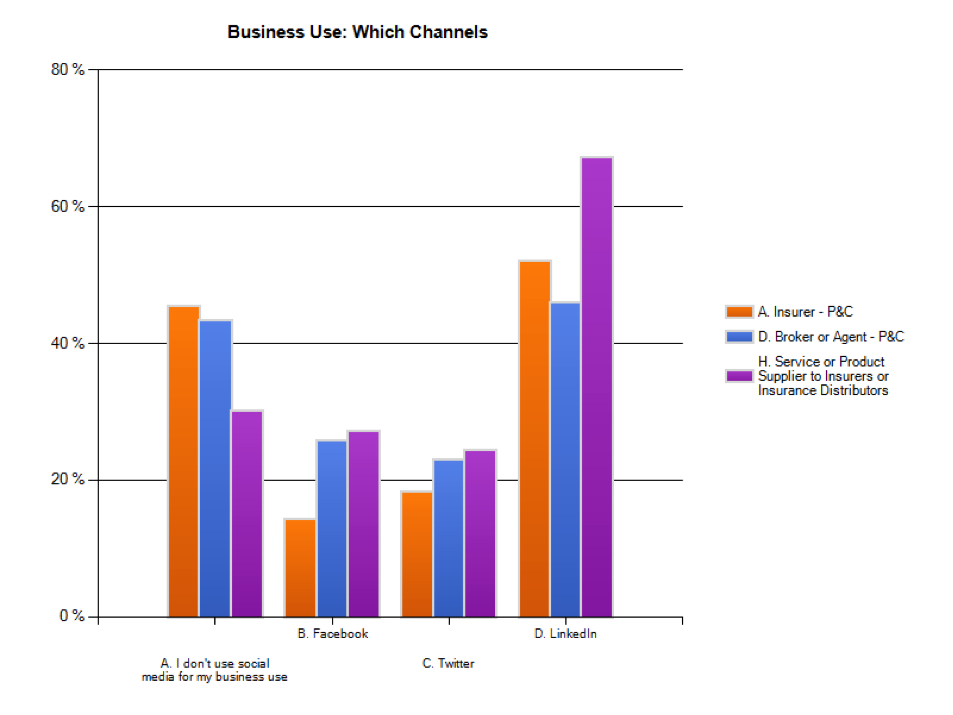 The second survey attracted 100 respondents, with a similar distribution among the three major groups  The focus of the survey was  with whom the respondents communicate with using social media.

Insurer respondents had an equal propensity to communicate with other employees of their own company and others in the insurance community.  Brokers had a higher percentage of use with the community than with co-workers.  50% of both groups reported using social media to communicate with customers.

Webinar presenters Doug Grant and Patrick Vice presented additional information on business use of social media generally and within the insurance community specifically, and supplied considerations for organizations going forward.  The Webinar attracted over 100 attendees, who provided questions and comments suggesting there is substantial interest in using social media in the insurance business.  Some participants reported they had projects that had been underway for several years.