The insurance industry is back to growth, as shown by Swiss Re’s annual assessment of global insurance markets for 2010. Premium volume grew in three quarters of the 78 markets covered in the publication. Growth was particularly strong in emerging markets. At the same time capital and solvency in the insurance industry improved robustly but low interest rates still had a negative impact on profitability.

Life insurance premiums globally grew 3.2% to USD 2 520 billion in 2010. Growth was especially strong in Asian emerging markets and robust in some large European markets. In the US and the UK, premiums declined, though at a more modest pace than 2009. While low interest rates negatively impacted life insurers’ profitability, they contributed to a strong improvement in the life industry’s accounting capital position by increasing the value of life insurers’ bond portfolios.

Daniel Staib, one of the authors of the new sigma study, says: “The dominating picture is that the industry is on the way back to the long-term growth trend. In fact, in some continental European countries, growth in the past year could be said to be very strong because sales of single premium products with comparatively attractive guarantees increased strongly.”

In emerging markets, life premiums rose by 13%. South & East Asia was the region that had the strongest growth, at 18%, led by China, with strong demand for both traditional and investment-linked products. Latin America and the Caribbean were not far behind, at 12%, led by Brazil.

Global non-life insurance premiums rose by 2.1% in 2010. In emerging and newly industrialised Asian countries, the strong economic rebound increased demand for insurance cover. Premium volume rose in Europe and the US as well. Industry capital continued its positive development and rose to a record high in 2010.

Underwriting results deteriorated by most in the US and turned negative in large European markets, in the latter case due to dismal motor results. In the eight largest markets, premium income did not fully cover claims payments and other costs for the second year in a row. “The average combined ratio of these leading markets worsened to 103%, compared to 101% in 2009. Given recent catastrophe loss events, it is clear that global underwriting results will deteriorate further in 2011. This indicates that prices are inadequate. In some markets, such as Italy and the UK, rates began to mount, most notably in the personal motor business, signaling that the underwriting cycle is at long last beginning to turn,” says Staib.

Outlook: Strong focus on growth in 2011

“In terms of the mature markets, growth in life insurance is expected to turn positive in the US, while in Western Europe, premium growth could slow down slightly, as rising interest rates will make life policies with interest rate guarantees less attractive,” says Staib. Over the longer term, the fact that our ageing societies increasingly need provisions for old age continues to be positive for life insurers. In non-life, the trend is towards higher premium growth in 2011. This trend will strengthen as premium rates begin to get adjusted upwards.

The global market share of emerging countries is expected to continue to increase strongly from today’s 14% over the next ten years. China is likely to become the second largest insurance market within a decade (in 2010 it is the sixth largest).

The main risks to the outlook are an escalation of the euro sovereign debt crisis or a major oil shortage caused by turmoil in major oil producing countries.

The study is the first public assessment of the performance of global insurance markets in 2010. The 78 markets, where data or estimates for 2010 are available, account for 98% of global premium volume. Overall, the report is based on 147 insurance markets. 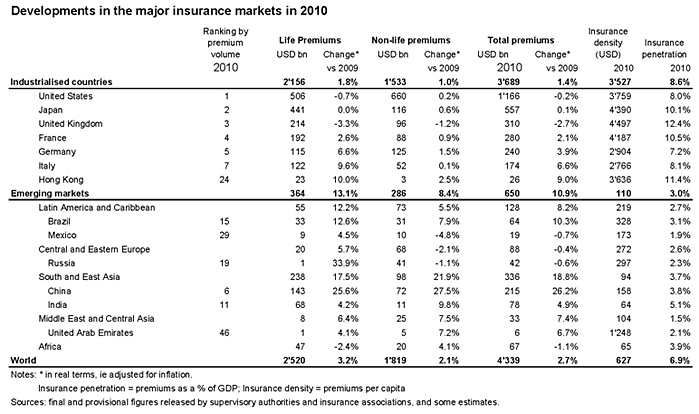 Swiss Re is a leading and highly diversified global reinsurer. The company operates through offices in more than 20 countries. Founded in Zurich, Switzerland, in 1863, Swiss Re offers financial services products that enable risk-taking essential to enterprise and progress. The company’s traditional reinsurance products and related services for property and casualty, as well as the life and health business are complemented by insurance-based corporate finance solutions and supplementary services for comprehensive risk management. Swiss Re is rated “A+” by Standard & Poor’s, “A1” by Moody’s and “A” by A.M. Best. http://www.swissre.com. Read the full Sigma Report in English or French