15 Mar 2010 – According to Swiss Re’s latest sigma study, natural catastrophes and man-made disasters claimed approximately 15 000 lives and cost insurers USD 26 billion in 2009. The overall cost to society was USD 62 billion. Insured losses were below average due to a calm US hurricane season.

On a worldwide basis, natural catastrophes cost insurers USD 22 billion in 2009, while man-made disasters cost an additional USD 4 billion. Insured losses were highest in North America, where they cost insurers over USD 12.7 billion. The death toll was the highest in Asia, where nearly 9 400 of the world’s 15 000 catastrophe victims lived. Insured losses in the region were approximately USD 2.4 billion.

Insured losses in 2009 were low

Compared to previous years, 2009 was a low loss year. According to Swiss Re’s latest sigma study, “Natural catastrophes and man-made disasters in 2009”, 133 natural catastrophes and 155 man-made disasters occurred in 2009. Six events each triggered insured losses in excess of USD 1 billion. The costliest event was the European winter storm Klaus, which struck France and Spain in January, and led to insured losses of EUR 2.35 billion (nearly USD 3.4 billion).

Historically, catastrophe losses have been highly volatile, with a strong upward trend. In US dollars, the historic upward trend for global insured losses is around 10%, and is driven by higher income, increasing wealth, a higher value concentration of wealth in loss prone regions and a trend towards more insurance coverage. Global warming and the related higher risk of extreme weather conditions also contribute to the trend.

Thomas Hess, Chief Economist of Swiss Re, commented: “The probability that we see natcat losses as low as those in 2009 is less than 35%. We have already seen significant events in 2010 with winter storm Xynthia in Europe or the earthquakes in Chile and Haiti. The industry is therefore well advised to prepare for much higher losses. Given their high volatility, losses could easily be three to five times what they were in 2009. In 2005, insured losses set a record when they soared to USD 120 billion. I would not be surprised if this record is broken in the not too distant future.”

Most of the attention in recent years has been mainly focused on the primary perils � ie earthquakes, hurricanes and winter storms. However, many other natural phenomena, referred to as secondary or other perils, can also cause widespread damage to property. The most prominent secondary perils are flooding, landslides, hail storms, tornadoes, winter storms outside Europe, snow and ice storms, droughts and bush fires. In 2009, more than half of the natural catastrophe loss burden was caused by secondary perils.

According to Dr Jens Mehlhorn, co-author of the sigma study: “Premiums from primary perils are often used to cross-subsidise losses from secondary perils. The risk is that if premiums deteriorate, they can become insufficient to pay for the sum of losses caused by primary and secondary perils. More advanced probabilistic risk assessment models would help to better gauge and price the risk of secondary perils.”

Earthquakes pose major risks to both developed and developing countries 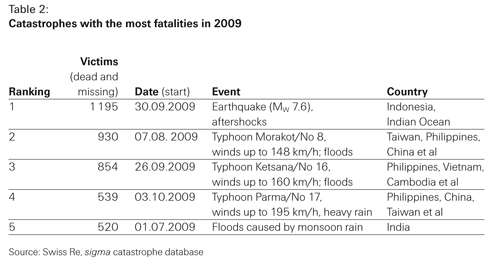 The massive earthquakes that struck Haiti in January 2010 and Chile in February 2010 are grim reminders of the destructive force of earthquakes. Since 1970, 360 damaging earthquakes have claimed over 1 million lives.

According to Dr Brian Rogers, co-author of the sigma study: “The deadliest earthquakes tend to occur in less economically developed countries and in regions that are usually densely populated and prone to earthquakes. These countries typically have low per-capita income and fewer resources for prevention- and post-disaster management.”

Although the death toll is usually higher in developing countries, insured losses are highest in the developed countries due to their wealth.

However, wealthier countries often have advanced prevention measures in place and better infrastructure to limit the consequences of disasters. Economically advanced nations also tend to purchase more insurance cover, which helps to finance the costs of reconstruction.

Less developed economies can also benefit from insurance cover, especially if the public and private sectors � ie (re)insurers, brokers, governments and international agencies – work together. Thomas Hess commented: “By contributing to catastrophe insurance solutions, private insurers and reinsurers can help create more stability in emerging markets, but this is only the beginning.” Governments and reinsurers have successfully teamed up in the past to implement reinsurance and capital market solutions. These solutions have provided significant financial relief when disastrous earthquakes and windstorms occurred as they allocate immediate liquidity to participating governments.

Swiss Re is a leading and highly diversified global reinsurer. The company operates through offices in more than 20 countries. Founded in Zurich, Switzerland, in 1863, Swiss Re offers financial services products that enable risk-taking essential to enterprise and progress. The company’s traditional reinsurance products and related services for property and casualty, as well as the life and health business are complemented by insurance-based corporate finance solutions and supplementary services for comprehensive risk management. Swiss Re is rated “A+” by Standard & Poor’s, “A1” by Moody’s and “A” by A.M. Best. www.swissre.com.