July 8, 2009 – Toronto � The Canadian economy gave up some ground in June, according to the latest business confidence survey findings from the Canadian Federation of Independent Business (CFIB). The Business Barometer® index fell to 58.5 last month�almost 2 points below its May level. After hopeful signs earlier in the spring, the setback suggests that GDP growth has not yet returned to positive territory and that economic recovery is not yet taking hold.

�From these results, most small businesses appear to be remaining in defensive mode,� explained Ted Mallett, CFIB�s vice-president of research and chief economist. �Looking ahead to expected performance in the next three or four months, the balance of opinion barely covers the break-even mark.� 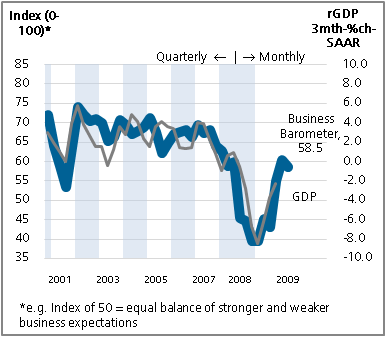 Measured on a scale between 0 and 100, an index level above 50 means owners expecting their business� performance to be stronger in the next year outnumber those expecting weaker performance. Data were collected quarterly from 2000 to mid-2008. Beginning September 2008, the data are now collected monthly. Going forward, the Business Barometer� will be released on a monthly basis.

The outcomes have also been broken down by province and industry, for these results or to view the full report visit www.cfib.ca/research/barometer/default.asp.

The June 2009 findings are based on 951 responses, collected from a stratified random sample of CFIB members, to a controlled-access web survey. Data are statistically accurate to +/- 3.2 per cent 19 times in 20.

CFIB is Canada’s largest association of small- and medium-sized businesses. Encouraging the development of good public policy at the federal, provincial and municipal levels, CFIB represents more than 105,000 business owners, who collectively employ 1.25 million Canadians and account for $75 billion in GDP. www.cfib.ca