Singapore and Hong Kong, September 27, 2007 � According to IDC�s survey report �The Momentum of Open Source: Adoption Plans and Challenges in Australia, Korea, India and the People�s Republic of China� (Doc # AP322113P), the top most influential factor for deploying open source technology was better protection against security breaches. The survey results suggest that organizations in India and the People’s Republic of China (PRC) deployed open source technology more than their counterparts in Australia and Korea. Furthermore, as expected, a larger number of small and medium size businesses (SMBs) in all four countries were deploying open source technology compared to large businesses. 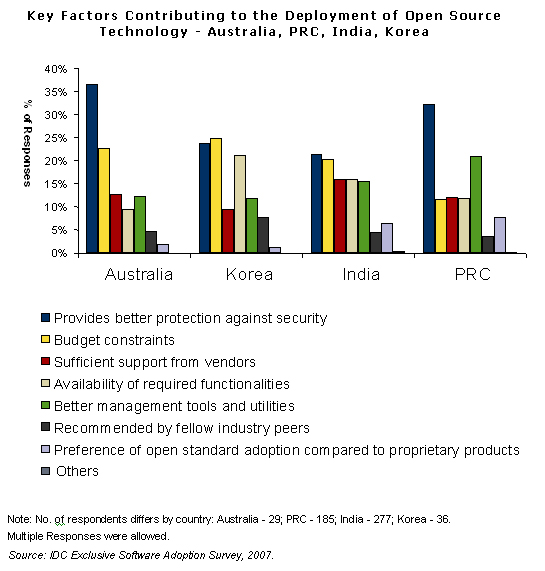 When segmenting the data by company size, it emerged that SMBs in all four countries deployed open source technology primarily to ensure protection from security threats, which is similar to large organizations in Australia, India and the PRC. Large organizations from Korea, however, cited better management tools and utilities as the leading factor.

This study presents the results and analysis of the IDC Exclusive Software Adoption Survey*, conducted in 2007. This document examines the current and future adoption trends of open source technology, as well as the reasons for deploying open source technology. It also profiles leading vendors’ offerings and value propositions, and provides strategic and tactical recommendations to vendors who have plans to capitalize on the increasing market demand.

About the �IDC Software Survey�

The key objective of the �IDC Software Survey 2007� is to understand and provide insights into current software adoption trends and spending plans for enterprises in different Asia/Pacific markets. The survey targeted respondents who are responsible for, or are the most knowledgeable about, an organization’s overall software procurement and deployment. A typical respondent holds an IT manager or IT director position. The survey was executed in four countries, Australia, China, India and Korea, with a total unweighted sample size of 1004.