April 18, 2007 New York, NY- While dial-up access to the Internet continues its slow death globally, the number of Internet adults utilizing ‘wired’ broadband connections may also be peaking, according to results released from Ipsos Insight’s annual The Face of the Web study. At the end of 2006, it is estimated that over three-quarters (77%) of the global online population was utilizing a broadband connection to access the Internet, in comparison to just 21% utilizing a dial-up connection. And though the prevalence of broadband access continued its steady growth trend through 2006, growing an additional seven percentage-points from 2005 (70%), the salad days of robust annual growth for broadband penetration may soon be coming to an end.

The latest findings from The Face of the Web 2006 – based on interviews in 12 key global markets with more than 6,553 adults, including 3,798 active Internet users at the end of last year – reflect the adoption possibilities of the Internet that few other consumer technologies have shown in the past. Ipsos Insight, the global survey-based marketing research firm, has been tracking global Internet developments since 1999.

Brian Cruikshank, Executive Vice President & Managing Director of Ipsos Insight’s Technology & Communications practice explains: “Over the past several years we have witnessed a significant migration within the online population to broadband access technologies. Most of these users were either upgrading from dial-up connections, obviously craving faster connection speeds, or were new users that jumped straight to broadband access to get online. However, with fewer dial-up users to ‘convert’ in the future, and fewer net new users to capture, broadband’s mercurial growth may begin to plateau in many developed markets in the near future.” 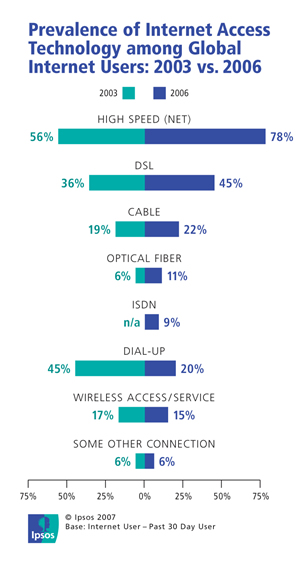 Since 2003, the percentage of active internet users – those who have gone online in the past 30 days – utilizing a high-speed connection has jumped over 20 percentage-points, as digital subscription lines (DSL) have been the major force driving up broadband penetration globally. In comparison, the number utilizing dial-up access has declined just as rapidly; just one in five Internet users today utilizes dial-up access to get online (20%), less than half the rate (45%) Internet users had utilized dial-up connections just three years ago.

“While most Internet users in developed markets primarily rely on high-speed DSL connections to get online, the prominance of high-speed access technology varies significantly by region. Within North America – US, Canada and Mexico collectively – cable modem connections represent a much larger percentage of overall high-speed access compared to other parts of the world. In the US alone, the percentage of those using cable modems (30%) is nearly equal to the number utilizing DSL (33%), and in Canada cable modem is the #1 Internet access technology. Within Asia Pacific, optical fiber connections are much more common than in any other part of the world, symptomatic of the high demand for Fiber to the Home (FTTH) installations in South Korean and Japanese households.” 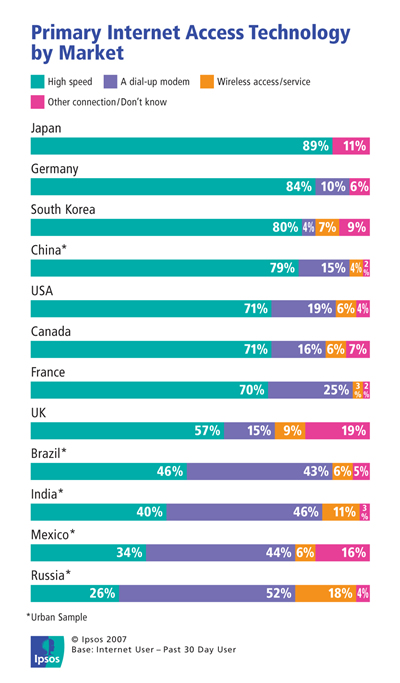 “Despite the fact that wireless Internet access from a PC still remains a relatively nascent behavior – just 15% of users connect to the Internet in this manner today – the future of Wireless Internet access looks very promising globally. Two factors contribute to this optimism. First, the rate of household ownership of notebook PCs continues to climb globally – now at 34% – as the growth rate for desktop ownership has remained stagnant for the past several years, underscoring the notebook’s dominance in driving PCs sales today. In addition, the prevalence of mobile Internet browsing – surfing the web on a wireless handheld device such as a cell phone or smart phone – also continues to climb globally; at the end of 2006, nearly one in three adults (31%) had ever accessed the Internet on a wireless mobile device. Second, in many
underdeveloped nations, which collectively represent the Industry’s untapped market for Internet User volume, some online adults are beginning to ‘leapfrog’ high-speed tethered connections, such as cable and DSL, and opt for Wireless access/service to connect to the Internet simply because that’s where the ‘access’ opportunities are emerging within these markets.

“The potential these underdeveloped markets presents hasn’t gone unnoticed by the Industry. More and more of the larger urban centers within these markets will continue to see developments in their wireless infrastructure, such as municipal Wi-Fi and WiMax networks, which will not only make it more attractive for non-Users to get online, but also introduce new users to richer content offerings from the start of their online experience. The implications from a content and overall online experience are profound,” adds Cruikshank. “We’ll be monitoring this during 2007 and are optimistic about the impact Wireless networks will have on the global Internet landscape, not only within underdeveloped markets, but also within larger Internet economies where Users are primed to make the leap to Wireless access based on their growing affinity for wireless devices such as notebook PCs and mobile phones.”

The Face of the Web 2006 study was conducted in November and December 2006 among a random sample of 6,553 adults in urban Brazil, Canada, urban China, France, Germany, urban India, Japan, urban Mexico, urban Russia, South Korea, the U.K., and the U.S.

The Face of the Web 2006 study examined:

To learn more about The Face of the Web 2006, please visit http://www.ipsosinsight.com/knowledge/techcomm/products/FOW.aspx.

Ipsos is a leading global survey-based market research company, owned and managed by research professionals. Ipsos helps interpret, simulate, and anticipate the needs and responses of consumers, customers, and citizens around the world.

Member companies assess market potential and interpret market trends. They develop and build brands. They help clients build long-term relationships with their customers. They test advertising and study audience responses to various media. They measure public opinion around the globe.

Ipsos member companies offer expertise in advertising, customer loyalty, marketing, media, and public affairs research, as well as forecasting, modeling, and consulting. Ipsos has a full line of custom, syndicated, omnibus, panel, and online research products and services, guided by industry experts and bolstered by advanced analytics and methodologies. The company was founded in 1975 and has been publicly traded since 1999. In 2006, Ipsos generated global revenues of 857.1 million euros ($1.1 billion USD).

Visit www.ipsos.com to learn more about Ipsos offerings and capabilities.