Despite a tendency to perceive themselves as conservative
technology adopters, Canadians recently have had a steady drumbeat of solid e-business news.

In March, Canada’s E-Business Roundtable reported that it
had successfully lobbied the federal government to adopt legislation that makes Canada a
more attractive market for venture capital investment. The Roundtable went on to cite
further legislative success, which has also made strides in improving Canadian corporate
taxation rates vis-�-vis those in the United States.

Then, in the beginning of April, Statistics Canada released
its third annual survey of Canadian e-commerce activity, showing that internet-based
business-to-consumer and business-to-business e-commerce trade had increased by 59.0% and
39.5%, respectively. And last week, consulting firm Accenture ranked Canada’s e-government
services as the best in the world, just ahead of Singapore and the United States.

So what is it that Canadians are doing right? For one,
Canada’s shared language and close proximity to the United States has provided its
consumers and business leaders with a front-row seat to the e-business innovation that is
occurring south of the border. Furthermore, Canadian companies conduct a great deal of trade with
their US counterparts, which in turn requires them to keep pace with technology adoption in the States.

The Canadian government has also taken an exceptionally
proactive role in encouraging e-business development among both its citizenry and business
community. Not only has the federal government set the example by developing successful,
customer-focused online services for Canadians, it has also taken a role in prodding
Canadian businesses to take their first steps in e-commerce.

Much of this leadership has come from Industry Canada,
which has developed several government-sponsored initiatives, one of which is the
SourceCan online marketplace. The primary role of this exchange is to facilitate
internet-based sourcing, by encouraging organizations to post tender bids on a centralized
website, which in turn is accessible to Canadian small and medium businesses. The free
marketplace posts tenders from both domestic and foreign governments, as well as corporations.

From a broader perspective, at work in Canada is a
two-pronged approach to promoting e-business development, with the first component aimed
at facilitating an improved entrepreneurial climate, and the second focused upon driving
productivity growth through the widespread adoption of e-business technology.

The former strategy takes a long-term view, and also relies
upon investments in Canada’s education system and workforce as a means of building solid
companies of the future. Nortel Networks, Research in Motion and BCE Emergis are all
products of this investment, and although all three have fallen on hard times of late,
they remain leaders within their respective sectors.

For the latter component, driving business adoption of
internet-based solutions has remained a somewhat greater challenge, as Canadian companies
do lag their American counterparts to some degree. But the conservatism with which
Canadian firms have approached technology adoption has also spared them from some of the
costly mistakes made during the dot-com bubble of the late 1990s.

Indeed, a 12-to-18 month lag in technology adoption should
not be too much of a concern when the long-term competitive picture is considered.
Furthermore, following the slowdown in technology spending during the past year and a
half, Canadian firms at present appear to be ready to participate in the next wave of
e-business technology investment at the same time as their counterparts in the United States.

Canadian businesses still have a long road of technology investment ahead
of them, but for their accomplishments to date, they can certainly stand up and take a bow.

eMarketer Senior Analyst Steve Butler wrote the the E-Commerce Trade
and B2B Exchanges Report, the IT Spending Report and The CRM Report. E-mail him at
[email protected] with comments, suggestions and questions. 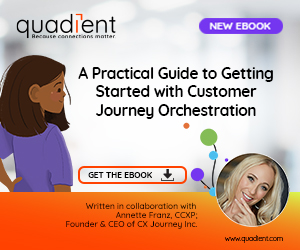